This article is work in progress and not yet part of the free encyclopedia IntactiWiki.

The United States of America

According to Wallerstein, the rate of male circumcision in the U.S. may have been around 10% in 1880, when it was just beginning to become legitimized as a medical procedure, and grew in popularity steadily until it's peak in the 1980's.[1] According to the American Medical Association's most recent major document on medical circumcision, the "Report 10 of the Council on Scientific Affairs", created by their "Council on Science and Public Health" in 1999, the prevalence of circumcision in the United States increased from about 30% in the 1930s to nearly 80% by the early 1970s".[2] Current reports estimate the rate of adult circumcised American men at approximately 80%.[3]

The following graphs represent data from a statistical brief released by the Healthcare Cost and Utilization Project (H-CUP).[4] 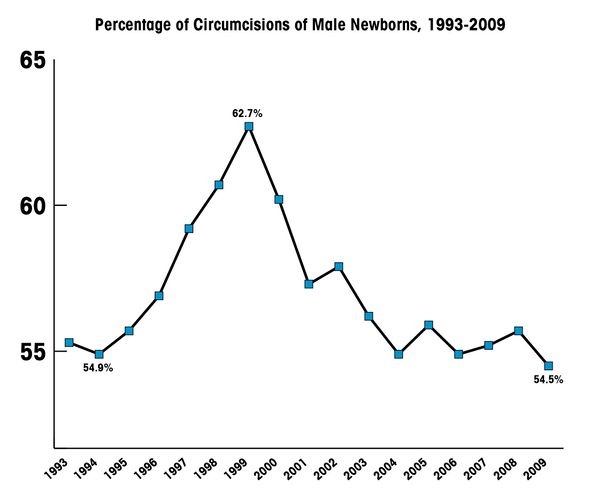 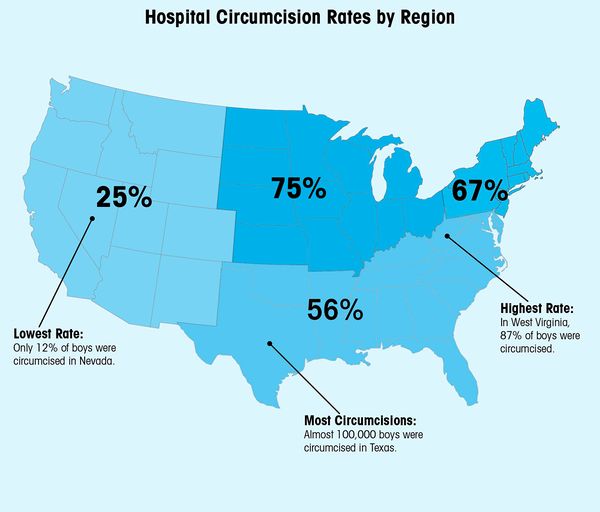 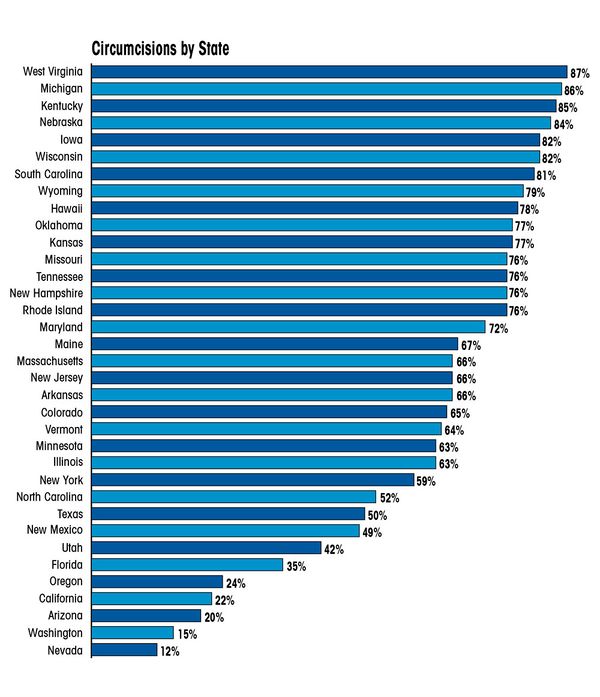 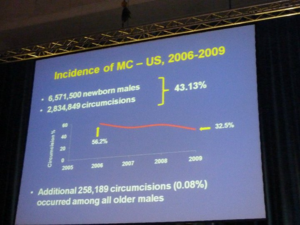 The picture of the slide used in the CDC presentation, seen here, was taken by an Intact America volunteer who attended the AIDS conference in Vienna.

One year earlier, at the AIDS 2010 Vienna conference, CDC spokesman Charbel El Bcheraoui delivered a presentation on circumcision complications, in which a study noting a steep drop in the neo-natal circumcision from 56% to 33% was presented. This is a sharp contrast from the 55% figure the CDC is currently releasing. The CDC disowns the 33% figure,[6] asserting that it was based on calculations by SDI Health, a company in Plymouth Meeting, PA that analyzes health care data, and was not definitive. Andrew Kress, the chief executive of SDI Health, cautioned that the data had not yet been published and was still being analyzed.[7]</ref> Both SDI and the CDC confirmed that the trend had been toward fewer circumcisions each year, adding that measuring the circumcision rate was not the purpose of the study, which was designed to measure the rate of complications from the procedure.[8]

Global circumcision rates, according to the WHO.