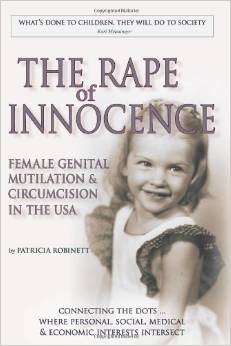 Genital mutilation in the USA has been a well-kept secret. "The Rape of Innocence" is an autobiographical account of a white Anglo-Saxon Protestant woman who discovered she had been the victim of clitoridectomy as a child in Kansas in the 1950s. The author is a therapist who deals with trauma. In her work, she has met many other American women and men who were genitally mutilated as children and adults. Could you -- or someone you love -- have been cut too? This book may explain the U.S. epidemic of sexual dysfunction, anger, anxiety, depression -- unresolved psychological trauma from circumcision. Now that the word is out, the healing can begin.