From IntactiWiki
(Redirected from WWDOGA)
Jump to navigation Jump to search 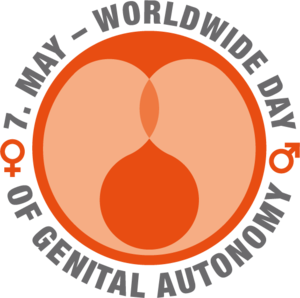 The Worldwide Day of Genital Autonomy (WWDOGA) is a campaign day for the genital autonomy of children which has been initiated by the German "Facharbeitskreis Beschneidungsbetroffener im MOGiS e.V.". Since 2013, it is celebrated on each 7th of May. This date has been chosen because on May 7th, 2012, the District Court of Cologne (Germany) has judged for the first time in Germany, that the circumcision of male children is an assault.

The aim of the WWDOGA is to propagate the right of bodily integrity and sexual self-determination for all children all over the world.

In 2019, the central German event for WWDOGA in Cologne did not take place for the first time on 7 May itself, but on the following Saturday, 11 May. The organizers were able to meet the wishes of many people who had little opportunity to take part in demonstrations during the week. The participation was correspondingly higher.

In 2020, the German WWDOGA event in Cologne, which was to take place again on the Saturday following WWDOGA, was canceled due to the corona crisis.[1] For this reason, MOGiS e.V. has posted video messages of the intended speakers online on its YouTube channel.[2]

In Germany, the WWDOGA was followed by a "Genital Autonomy" conference in the Haus der Jugend (Youth Hostel) in Frankfurt/Main.

In Germany, a Scientific Symposium took place one day earlier in Cologne, being organized by MOGiS e.V. and pro familia NRW.

The speeches on WWDOGA 2020 were not held live in Cologne because of the Corona Pandemic 2020, but were shared via video message in the YouTube channel by MOGiS e.V., with Victor Schiering from MOGiS e.V. having three messages: