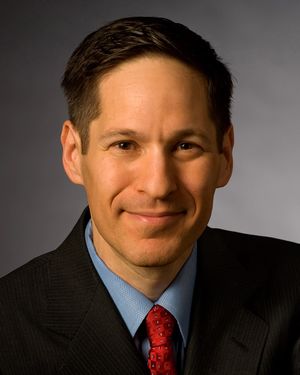 Dr. Thomas R. Frieden is the current director of the U.S. Centers for Disease Control and Prevention (CDC) and Administrator of the Agency for Toxic Substances and Disease Registry (ATSDR). He was New York City Health Commissioner from 2002–2009.[1] As Health Commissioner of New York City, Frieden tried to promote circumcision as a way to prevent HIV in homosexual males.[2][3][4][5] He cited the latest African trials and tried to advocate circumcision as HIV prevention policy in general.

In 2005, a circumcision ritual practiced by some Orthodox Jews alarmed city health officials, after it led to three cases of herpes - one of them fatal.[6]

The New York City Health Commissioner at the time, Thomas R. Frieden, wrote a letter to the Jewish community pardoning the mohel involved and dropped the matter as not being a New York City public health issue by stating that "[it] is our preference for the religious community to address these issues itself."[6] Prior to the letter, the DOHMH had been pursuing a lawsuit against the mohel in question. It was subsequently dropped and the ban on the practice rescinded, in favor of letting a religious court settle the matter, described as unusual by some legal experts. This outcome was likely a result of pressure by mayor Bloomberg after he reached a deal with local rabbis to not ban the practice.[7]

In the letter, Thomas states that

Acknowledgement of the Problem
“ ...there is no reasonable doubt that the practice of metzitzah b’peh (“suction by mouth”) has infected several infants in New York City with the herpes virus, including one child who died and another who has evidence of brain damage...The connection between metzitzah b’peh and neonatal herpes has been documented in the medical literature... ”
– Thomas R. Frieden [8]

Yet, Thomas R. Frieden drops the matter as a New York City Health Commissioner by downplaying the issue:

Downplaying the Dangers of Metzitzah B'Peh
“ With an estimated average of fewer than 30 cases of all forms of infant herpes infections occurring per year in New York City, the odds of one mohel being associated with 3 cases of

neonatal herpes are infinitesimally small (about 6.9 million to 1)...Some religious authorities consider metzitzah b’peh the only acceptable way to draw blood away from the circumcision cut. ”

Thomas did make a number of recommendations, including the recommendation that the mohel place a glass tube or a glass tube attached to a rubber bulb around the infants penis before suction so as not to allow the lips of the mohel to come in direct contact with the child's bleeding penis. However, since a ban was not to be placed, and since "some religious authorities consider metzitzah b’peh the only acceptable way to draw blood", he encouraged parents to "weigh the risks of metzitzah b’peh" before choosing it over alternatives.[6]