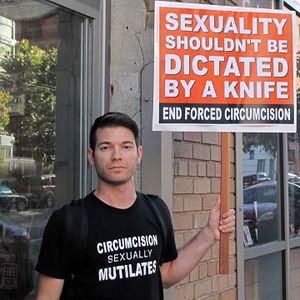 Jonathon Conte (14 June 1981 in Tampa – 9 May 2016 in San Francisco) was an intactivist and survivor of male genital mutilation, who among other things contributed his case history for the Circumpendium.

He engaged as Events Editor at IntactNews and as Events Coordinator with the Bay Area Intactivists. Before, he had worked in the San Francisco MGM Bill initiative to protect all children from forced genital cutting and work with and support other pieces of pending legislation on the local, state and national level.

He introduced the bloodstained suit to America at the 2012 American Academy of Pediatrics convention in New Orleans.

On May 9, 2016, he took his own life. A few days earlier he demonstrated, as often, on the streets for the right of children on intact genitals, but apparently didn't talk to anybody about his great pain.

Jonathon Conte will always be remembered for his great engagement and support for the Intactivists movement. But above all, he will be linked to the Bloodstained Men. 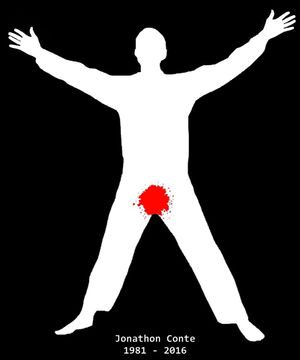