Anatomical investigations have identified the prepuce as a primary erogenous zone in humans.[1]

The two primary sensory receptors in primate skin are free nerve endings and encapsulated or corpuscular receptors. While free nerve endings (pain, itch, and temperature receptors) are found in most skin, the encapsulated receptors are concentrated in regions that require specialised touch sensitivity, such as at the fingertips, lips, external genitalia, perianal skin, and transition areas between skin and mucous membranes.[11]

The Innervation of the foreskin is impressive [12] The foreskin is what's known as a specific erogenous zone.[1] This means that it is richly equipped with a high density and concentration of specialized and sophisticated nerve receptors that convey pleasure.The presence of specialized nerves, nerves that do no not exist elsewhere, make this part of the penis especially important. Consequently, this has been studied in detail by respected anatomists for over a century, who have transformed their knowledge by detailed empirical observation of the nerves that are present in the foreskin.

These remarkable organs provide the foreskin with its amazing ability to detect the slightest sensations of touch, motion, temperature, and pressure. We are still unaware of all the facts about these fascinating structures. Future research may discover even more nerve receptors in the foreskin and help clarify what purposes they serve.The primary zones of erogenous sensitivity are the frenulum, ridged mucosa, and the preputial orifice and the external fold of the foreskin. All of these zones are orgasmic triggers. Continuous gentle stimulation of any one of these areas can elicit pleasure, orgasm, and ejaculation.

In 1991 the ridged bands of the male prepuce were identified as a concentrated area of corpuscular receptors.[25][13]

In a 2007 study, which was published in the BJU International. They physically measured the sensitivity of all the parts of the penis. They used a very accurate pressure sensing probe while the test subject, who’s view was blocked with a screen, reported a sensation of touch. To demonstrate precision they took each measurement multiple times. To no surprise, their results corroborated with the neuro-anatomy that has been discussed previously. 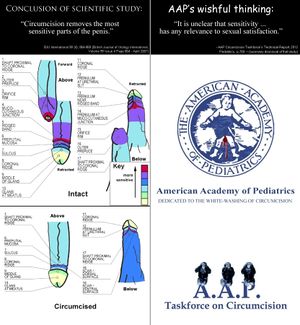 In the AAP's 2012 Circumcision Task force report, the issues of sensitivity reduction were given obligatory mention but largely glossed over, and little space was devoted to the topic. The purpose of the AAP 2012 report was to encourage neonatal non-therapeutic circumcision and third-party payment so little or nothing was said about the multiple functions of the foreskin.

At right is an easy-to-understand illustration of the Sorrells study showing the loss of tissues. Tissues show in color their relative sensitivity thresholds to light touch. sensitive tissue. On the infographic's opposite side: The AAP's expressed skepticism (quotes from their 2012 Circumcision Taskforce report) on whether loss of all that erogenous tissue could really affect sexual enjoyment.

The 2012 AAP Circumcision Policy expired in 2017 and has not been re-affirmed or re-validated in any way. The AAP currently has no circumcision policy.