Circumcision: A History of the World's Most Controversial Surgery 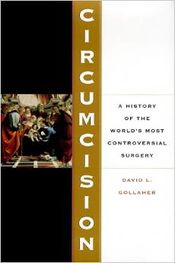 From the extraordinarily painful initiation rite of the ancient Egyptians, through the Hebrew purification ritual, through its use by nineteenth-century doctors as prevention for ailments including bedwetting, paralysis, and epilepsy, circumcision has had a long and varied history. Perhaps the greatest mystery, however, is its persistence over time through vastly different social contexts.Historian of medicine David Gollaher takes a comprehensive look at the practice in this lively, scholarly history. Circumcision also addresses the growing controversy over the procedure’s continuance, and those opposing routine circumcision will find support here. Gollaher concludes that “if male circumcision were confined to developing nations, it would by now have emerged as an international cause célèbre.”

More than a million infant boys are circumcised every year in America, the highest occurrence of this procedure in the world. Why? Out of sheer cultural habit, concludes David Gollaher in his groundbreaking study, Circumcision. The tremendous momentum behind Gollaher's account is generated by one simple question: what is known about this most common of procedures? Alarmingly, precious little. Gollaher remedies that problem by tracing the historical roots of circumcision as a rite of passage into manhood in various ancient cultures before bringing the reader to 19th-century America, when circumcision rates skyrocketed through endorsements by the nascent American medical profession, which credited circumcision with exaggerated health benefits. Circumcision would eventually turn into a mark of class distinction, and the surgery would become entrenched in modern medical practices, despite scant study of its benefits, dangers, or side effects. Gollaher is to be commended for maintaining an even perspective on a practice that is sure to become increasingly controversial; he allows the research itself to fascinate and illuminate. As expected, there are many unsettling graphic descriptions in this book, but its most horrifying revelation is its most casual: the incontrovertible fact that circumcision remains the least understood--yet most widely practiced--surgery in the United States. --Sumi Hahn Almquist