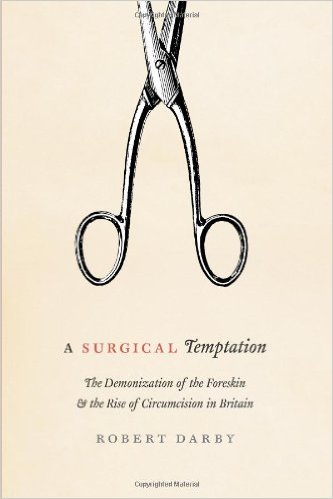 Why Britain adopted a practice it had traditionally abhorred and then abandoned it after only two generations is the subject of A Surgical Temptation. Robert Darby reveals that circumcision has always been related to the question of how to control male sexuality. This study explores the process by which the male genitals, and the foreskin especially, were pathologized, while offering glimpses into the lives of such figures as James Boswell, John Maynard Keynes, and W. H. Auden. Examining the development of knowledge about genital anatomy, concepts of health, sexual morality, the rise of the medical profession, and the nature of disease, Darby shows how these factors transformed attitudes toward the male body and its management and played a vital role in the emergence of modern medicine.

An erudite, lively, and sometimes combative investigation of a formative period in medical history, A Surgical Temptation will inform and engage any reader with an interest in the history of medicine, gender, sexuality, the practice of circumcision in the world today, and the ways in which culture fashions the human body.

I am an independent scholar and freelance writer living in Canberra, the capital of Australia. I began my writing and research career as a literary historian, with a Ph.D.[a 1] on Australian literature and politics in the 1930s, but my interests have broadened since then to include many topics in cultural, social and medical history, as well as ethics and current affairs. My major published work so far has been a detailed account of the rise and fall of routine "health" circumcision in Britain (A Surgical Temptation, 2005), and since then I have written widely on medical, historical and ethical aspects of both male and female circumcision - which I regard as primarily a human rights and social justice issue, not really a medical issue at all. I have also prepared a collection of the medical writings of Arthur Conan Doyle, Round the Red Lamp (Valancourt Books, 2007), and an edited edition of Elements of Social Science by the great Victorian iconoclast George Drysdale. Although he is largely forgotten today, his book was extremely popular throughout the second half of the 19th Century as a source of information and advice on "the facts of life" and especially contraception. My most recent article is "The child's right to an open future: Is the principle applicable to non-therapeutic circumcision", published in the Journal of Medical Ethics, July 2013. For further information see the following websites: