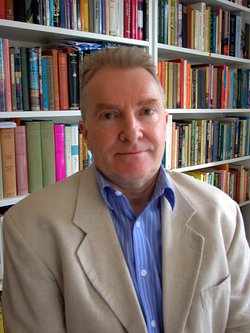 Robert John L. Darby BA[a 1], B Litt[a 2], Ph.D.[a 3] (1953 in Melbourne – March 2019 in Canberra, ACT, Australia[1][2]) was an independent scholar and freelance writer from Canberra, the capital of Australia. He began his writing and research career as a literary historian, with a Ph.D.[a 3] on Australian literature and politics in the 1960s, but his interests have broadened since then to include many topics in cultural, social and medical history, as well as ethics and current affairs. His major published work so far has been a detailed account of the rise and fall of non-therapeutic "health" circumcision in Britain (A surgical temptation, 2005), and since then he has written widely on medical, historical and ethical aspects of both male and female circumcision - which he regard as primarily a human rights and social justice issue, not really a medical issue at all. He is also author of "The sorcerer's apprentice: Why can't the United States stop circumcising boys?" His writings fully qualify him to hold the title of Intactivist.

He also prepared a collection of the medical writings of Arthur Conan Doyle, Round the Red Lamp (Valancourt Books, 2007), and an edited edition of Elements of Social Science by the great Victorian iconoclast George Drysdale.