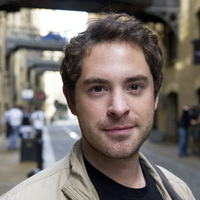 Brian D. Earp (born 29 September 1985, USA) is contributing writer at The Atlantic, Associate Director, Yale-Hastings Program in Ethics and Health Policy at The Hastings Center and Research Fellow at the Uehiro Centre for Practical Ethics.

Brian D. Earp is Associate Director of the Yale-Hastings Program in Ethics and Health Policy at Yale University and The Hastings Center, and a Research Fellow in the Uehiro Centre for Practical Ethics at the University of Oxford. His work is crossdisciplinary, following training in philosophy, cognitive science, psychology, history and sociology of science and medicine, and ethics. His research has been covered in Nature, Popular Science, The Chronicle of Higher Education, The Atlantic, New Scientist, and other major outlets; he has also been cited in the U.S. President’s Commission on Bioethics in Gray Matters: Topics at the Intersection of Neuroscience, Ethics, and Society, and in a landmark British high court case by Sir James Munby.[1]

In 2016, he was invited by the Royal Netherlands Academy of Arts and Sciences to serve as one of a small group of “high-level experts” reporting to the Dutch government on the replication crisis in science and medicine; he later served as a peer reviewer on the final report. He was also invited to submit materials based on his work in gender and sexuality to a special committee of the European Parliament; this work has now been published as part of a monograph series produced by the same.[1]

Earp is co-recipient of the 2018 Daniel M. Wegner Theoretical Innovation Prize from the Society for Personality and Social Psychology. He is also recipient of both the Robert G. Crowder Prize in Psychology and the Ledyard Cogswell Award for Citizenship from Yale University, where he was elected President of the Yale Philosophy Society as an undergraduate as well as Editor-in-Chief of the Yale Philosophy Review. He then conducted graduate research in psychological methods as a Henry Fellow of New College at the University of Oxford. While at Oxford, he completed additional coursework in the philosophy of science and philosophy of mind, which he went on to publish in peer-reviewed journals. He also conducted graduate research in the history, philosophy, and sociology of science, technology, and medicine as a Cambridge Trust Scholar and Rausing Award recipient at Trinity College at the University of Cambridge.[1]

After spending a year in residence as the inaugural Presidential Scholar in Bioethics at The Hastings Center in Garrison, New York, Brian is now a Gordon Fellow, Irene Battell Learned Fellow, McDougall Writing Fellow, Benjamin Franklin Graduate Fellow, and Ph.D. student in philosophy and psychology at Yale University, having been jointly admitted to both departments. His essays have been translated into Polish, German, Italian, Spanish, French, Portuguese, and Hebrew.[1]