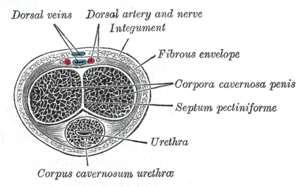 Transverse section of the penis.

The constituent cavernous cylinders of the penis.

(The following text or part of it is quoted from the free Wikipedia article Corpus cavernosum penis:)


A corpus cavernosum penis (singular) (literally "cave-like body" of the penis, plural corpora cavernosa) is one of a pair of sponge-like regions of erectile tissue, which contain most of the blood in the penis during an erection.[1][2][3]

Such a corpus is homologous to the corpus cavernosum clitoridis in the female; the body of the clitoris that contains erectile tissue in a pair of corpora cavernosa with a recognisably similar structure.

The two corpora cavernosa and corpus spongiosum (also known as the corpus cavernosum urethrae in older texts and in the adjacent diagram) are three expandable erectile tissues along the length of the penis, which fill with blood during penile erection. The two corpora cavernosa lie along the penis shaft, from the pubic bones to the head of the penis, where they join. These formations are made of a sponge-like tissue containing trabeculae, irregular blood-filled spaces lined by endothelium and separated by septum of the penis.[4][5]

The male anatomy has no vestibular bulbs, but instead a corpus spongiosum, a smaller region along the bottom of the penis, which contains the urethra and forms the glans penis.

Blood can leave the erectile tissue only through a drainage system of veins around the outside wall of the corpus cavernosum. The expanding spongy tissue presses against a surrounding dense tissue (tunica albuginea) constricting these veins, preventing blood from leaving. The penis becomes rigid as a result. The glans penis, the expanded cap of the corpus spongiosum, remains more malleable during erection because its tunica albuginea is much thinner than elsewhere in the penis.