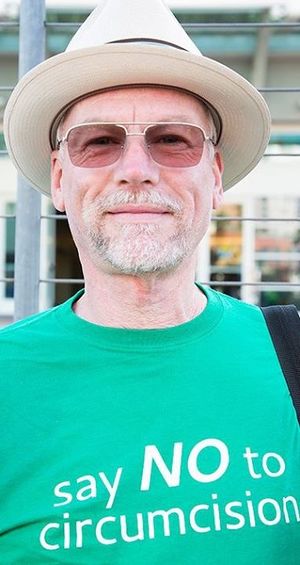 Lloyd Schofield from West Hartford (USA) is an intactivist in San Francisco who engages at the Bay Area Intactivists. He and his fellow organizers have created an initiative known as the "Prohibition of Genital Cutting of Male Minors".

In 2011, Schofield and his initiative have designed a proposal[1] to ban the circumcision practice in the city and county of San Francisco. The proposal would make it illegal to "circumcise, excise, cut, or mutilate the whole or any part of the foreskin, testicles, or penis of another person who has not attained the age of 18 years". Doctors, mohels and any other person who performs the procedure would face up to a $1,000 fine or a year of jail time. They collected more than 12,000 valid signatures (7,300 signatures were required) to put the proposal on the city ballot in November 2011.

In July 2011, a California State Superior Court judge struck the proposed male circumcision ban from the November ballot, ruling that the city cannot regulate medical procedure and citing religious freedom protections. "We will not stop until all men are protected from this damaging and harmful surgery", Schofield told the Associated Press.[2]