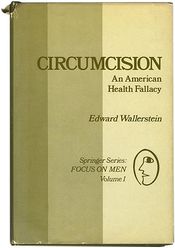 The major event of 1980 was the release of Edward Wallerstein’s painstaking study, Circumcision: An American health fallacy, published by the international science publishers, Springer. Wallerstein did not really do anything different from the earlier efforts of Lewis, Foley and Preston, but he did it in a lot more detail, and with both a far greater depth of research and a far wider range of reference, embracing cultural and ethical considerations as much as narrowly medical ones. He also reviewed the case of female circumcision and clitoridectomy, finding them not so different from what was done to boys. The result was a formidable and, as it proved, unanswerable case against circumcision: there has been no successful attempt to refute the arguments and data presented in his study, though circumcision advocates have done their best to ignore it, or belittle the author as medically unqualified. (Why should he need a licence which permitted him to perform circumcisions in order to produce a critique of the practice? Wallerstein’s independence from the sort of indoctrination experienced by those who had attended American medical schools was a decisive factor in his ability to see that the Emperor had no clothes.) - http://www.historyofcircumcision.net/index.php?option=content&task=view&id=67