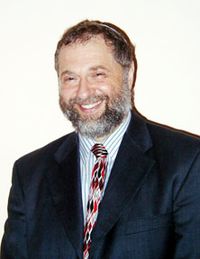 Aaron Jesin is a Canadian-based medical doctor who also doubles as a mohel, or a religious child circumciser. Being a mohel and a circumciser of non-Jewish babies, circumcision is one of Aaron Jesin's main sources of income. As someone who circumcises under the guise of medicine, he touts the "medical benefits of circumcision." According to his own website, Jesin has been a mohel since 1978, and he has since performed over 10,000 circumcisions.

Jesin used metzitzah b’peh in his circumcisions for approximately five years before an encounter with Rabbi Moshe Tendler, who advocated the use of gloves and a sterile glass tube. Jesin said he has since performed circumcisions with those accessories. Jesin said that in the rare case that a family insists on metzitzah b’peh today, he asks the father to perform that part of the ritual.[1]

On his website, Jesin links to Circlist, a circumfetishist organization. He also links to Brian J. Morris's website. His select list of "resources" can be seen here.

The information for this article can be found directly on Aaron Jesin's webpage: