(The following text or part of it is quoted from the free Wikipedia article Piercing:)


Piercing (to pierce [pɪəs], via Old French percier and Vulgar Latin *pertusiare from Latin pertundere, pertusus "pierce, break through") is a form of body modification in which jewelry in the form of rings or rods is attached to various parts of the human body through the skin and underlying fatty or cartilage tissue becomes. Although the practice itself is old, the term piercing was not established until the mid-1990s. 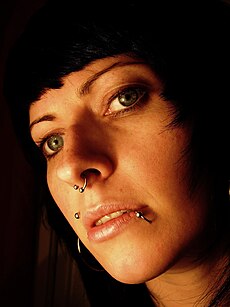 (The following text or part of it is quoted from the free Wikipedia article Body piercing:)


Body piercing, a form of body modification, is the practice of puncturing or cutting a part of the human body, creating an opening in which jewelry may be worn. The word piercing can refer to the act or practice of body piercing, or to an opening in the body created by this act or practice. Although the history of body piercing is obscured by popular misinformation and by a lack of scholarly reference, ample evidence exists to document that it has been practiced in various forms by both sexes since ancient times throughout the world.

Ear piercing and nose piercing have been particularly widespread and are well represented in historical records and among grave goods. The oldest mummified remains ever discovered were sporting earrings, attesting to the existence of the practice more than 5,000 years ago. Nose piercing is documented as far back as 1500 BC. Piercings of these types have been documented globally, while lip and tongue piercings were historically found in African and American tribal cultures. Nipple and genital piercing have also been practiced by various cultures, with nipple piercing dating back at least to Ancient Rome while genital piercing is described in Ancient India c. 320 to 550 CE. The history of navel piercing is less clear. The practice of body piercing has waxed and waned in Western culture, but it has experienced an increase of popularity since World War II, with sites other than the ears gaining subcultural popularity in the 1970s and spreading to mainstream in the 1990s.

The reasons for piercing or not piercing are varied. Some people pierce for religious or spiritual reasons, while others pierce for self-expression, for aesthetic value, for sexual pleasure, to conform to their culture or to rebel against it. Some forms of piercing remain controversial, particularly when applied to youth. The display or placement of piercings have been restricted by schools, employers and religious groups. In spite of the controversy, some people have practiced extreme forms of body piercing, with Guinness bestowing World Records on individuals with hundreds and even thousands of permanent and temporary piercings.

Contemporary body piercing practices emphasize the use of safe body piercing materials, frequently utilizing specialized tools developed for the purpose. Body piercing is an invasive procedure with some risks, including allergic reaction, infection, excessive scarring and unanticipated physical injuries, but such precautions as sanitary piercing procedures and careful aftercare are emphasized to minimize the likelihood of encountering serious problems. The healing time required for a body piercing may vary widely according to placement, from as little as a month for some genital piercings to as much as two full years for the navel.

(The following text or part of it is quoted from the free Wikipedia article Piercing: Genitalien:)

Genital piercings are increasingly in demand and are most common among young women.[1] Studies in the US found that 12-14 percent of college students (ages 18-22) have had a genital or nipple piercing.[2]

For men,[3] wie auch für Frauen[4] the main motive, as with other piercings, is the aesthetic aspect and the individualization of the pierced body region. In addition to their purely aesthetic function, some genital piercings also have the effect of exerting additional stimulation during sexual intercourse and thus causing an increase in irritation. While female genital piercings only have an effect on the wearer herself, male genital piercings (especially Ampallang and Apadravya) increase the sense of pleasure for both partners.[5] In traditional societies, an intimate piercing can be understood as a sign of commitment to a partner, similar to the wedding ring in western culture.[6]

One of the most popular genital piercings for men is the Prince Albert Piercing (PA). It runs from the urethra through the lower wall of the penis and is usually worn with a thicker material because of the increased wearing comfort. The Ampallang runs horizontally, i.e. across the glans. Analogously, the Apadravya sits vertically. The crosswise combination of both is called Magic Cross. The Reverse Prince Albert (also: Queen Victoria) runs like a normal PA through the urethra, but emerges from the top of the glans and thus forms a kind of "half Apadravya".

A dydoe sits in the rim of the glans. While the healing of the other piercings is promoted through contact with urine, it is a bit more tedious here.

The frenulum piercing runs through the foreskin frenulum and is one of the most uncomplicated male genital piercings. Expanding this piercing to accommodate jewelry with heavier gauge wire is fairly easy and increases comfort.

The pubic piercing in the area above the base of the penis is one of the surface piercings.

An Oetang sits in the foreskin. It can be attached anywhere and is most commonly worn with a ball closure ring.

Piercings in the front area of the scrotum are called Hafada piercing or Scrotal and are also uncomplicated genital piercings in terms of healing and maintenance. Transscrotal piercing, on the other hand, refers to a body modification that creates a connection between the front and back of the scrotum. Since this is not stung, but cut with a scalpel and then sewn together, the term "piercing" is technically wrong. 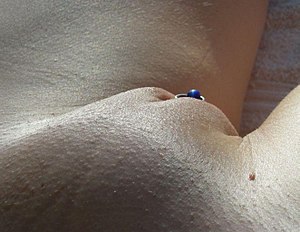 The most common forms of genital piercings in women are the clitoral hood piercing, the labia piercing and the Christina piercing.

With the labia piercing, a distinction is made between piercings in the inner and outer labia, which are exposed to different circumstances in terms of implementation and healing.

The Christina piercing is a surface piercing that is pierced vertically in the crease where the outer labia meet at the top.

The lower end of the Nefertiti piercing ends under the clitoral skin fold similar to the clitoral hood piercing. It passes through the prepuce of the clitoris and the mons pubis.

Similar to the Prince Albert in men, the Princess Albertina piercing runs from the urethral opening to the vaginal opening.

The clitoral piercing is one of the most stimulating genital piercings in women. The strong innervation of the tissue to be pierced makes it riskier and more painful to carry out than other piercings. It can be pierced horizontally and vertically through the clitoris.

A centered, vertical piercing at the lower end of the inner labia is called a fourchette piercing.

The suitcase piercing, which runs between the anus and vagina, is relatively rare and risky.