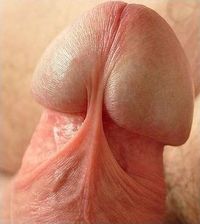 Pictured: Frenulum in the human penis.

A frenulum (or frenum, plural: frenula or frena, from the Latin frēnulum, meaning "little bridle") is a small fold of tissue that binds movable structures to non-movable structures in the body. In the human body, examples of frenula include the frenulum linguae, under the tongue, the frenulum labii superioris inside the upper lip, and the frenulum labii inferioris inside the lower lip. The word frenulum on its own is often used for the frenulum in the human penis, which is an elastic band of tissue under the glans penis that connects to the foreskin to the vernal mucosa, and helps contract the prepuce over the glans. This is sometimes colloquially known as the "banjo string".

The frenular artery passes though the frenulum.[1]

The frenulum and the associated tissue delta on the underside of the penis below the corona has been described in sexuality textbooks as "very reactive" and "particularly responsive to touch that is light and soft." The “underside of the shaft of the penis, meaning the body below the corona” is a “source of distinct pleasure.”[2] Crooks & Baur (1993) observe that two extremely sensitive specific locations that many men find particularly responsive to stimulation are the corona, and the frenulum.[3] Repeated stimulation of this structure will cause orgasm and ejaculation in some men. In men with spinal cord injury preventing sensations from reaching the brain, for example, the frenulum just below the glans can be stimulated to produce orgasm and peri-ejaculatory response.[4][5] [6]

The frenulum may be entirely missing in cases of first degree hypospadias.

It is possible for the frenulum to tear during sexual activities. The frenular artery, a branch of the dorsal artery, may be severed, causing significant bleeding.

Song et al. (2015) report that the frenulum may need to be lengthened after a circumcision amputates skin tissue from the penis.[10]

Lack of a frenulum

The frenulum may be missing in some males for a few reasons.

Rarely, boys are born without a frenulum. This condition causes no issues and permits unusually full retraction of the foreskin.

It may be missing in men who were circumcised at birth, as it is often crushed and cut away, or broken during infant circumcision. Men who are circumcised as adults may specify whether or not they wish to preserve their frenulum. The frenulum was reported to be cut in 26.7%, 20%, and 33.33% of circumcised patients in various surveys.[7][8] 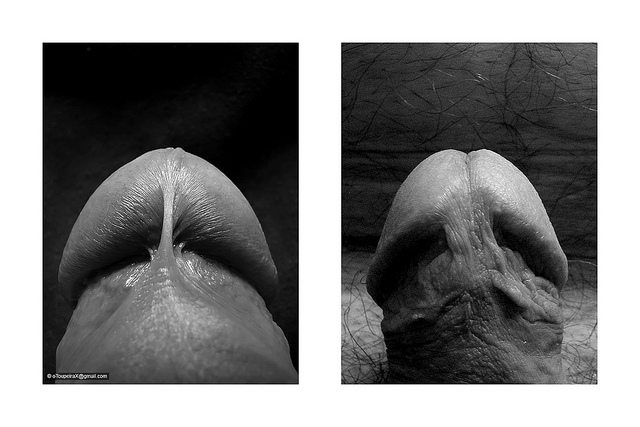 Comparison of an intact frenulum vs. the frenulum remnant on a circumcised penis. Image used with permission of artist.