The ridged band is a band of highly innervated wrinkly skin just inside the tip of the foreskin. The term ridged is used to describe the area instead of the more commonly used term wrinkled. It has, especially in regard to phimosis (and preputioplasty), been called preputial ring or phimotic ring, ring being analogous to band, referring to the shape, and preputial meaning pertaining to the prepuce. More particularly, it refers to the transitional area from the external to the internal surface of the prepuce, or foreskin. The ridged band separates the outer skin of the penis from the inner mucosa. The ridged band contains nerve endings arranged at the crest of rete ridges. The nerve endings resemble Meissner's corpuscles or Krause end-bulbs.

The nerves of the ridged band are believed to provide sensory input to the autonomic nervous system, which regulates sexual response.

Because of its location, the ridged band is invariably excised if a male is circumcised.

The late John R. Taylor, MB, Ch.B., MRCPEd, FRCPC[a 1], a British-Canadian pathologist and biomedical researcher who practiced medicine at the Health Sciences Centre in Winnipeg, MB, first used the term "ridged band" instead of "wrinkly skin" and described the ridged band at the Second International Symposium on Circumcision, organized by NOCIRC in San Francisco, 1991, after examining the foreskins of 22 adults obtained at autopsy. The mean age was 37 years, range 22–58. The prepuces were studied grossly and histologically. His research was later published by the British Journal of Urology in 1996.[1] 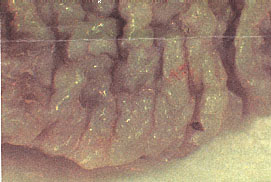 Part of a ridged band under 10× magnification. The delicate and highly innervated mucosa features many ridges which increase sensitivity through increased surface area.

Taylor described the ridged band as a transversely ridged band of mucosal tissue, located just inside the tip of the foreskin near the mucocutaneous boundary. He characterized the ridged band as intensely vascular and richly innervated, stating that it "contains more Meissner's corpuscles than does the smooth mucosa", and noted that these tactile corpuscles were found only in the crests of ridges.[1]

Winkelmann (1956) had previously reported that the prepuce is "a region of great sensitivity and possessed of an abundant nerve supply."[2] Cold & Taylor (1999) stated:

Work in progress shows that stretching the prepuce and its ridged band triggers reflex contraction of muscles of the bulb of penis known to be associated with ejaculation and, not insignificantly, erogenous sensation.[4]

The range of functions of the ridged band remains uncertain but it is deeply corrugated, rich in distortion-sensitive Meissner's corpuscles and subject to the movement of muscularised shaft skin during sexual intercourse. It now seems that the concertina-like ridged band might be reflexogenic as much as fine-touch sensitive. Initial study (J.R.T. unpublished) indicates that the real importance of the ridged band to sexual intercourse lies in an ability to trigger a reflex contraction of muscles responsible for ejaculation.[5]

The ridged band of prepuce is tucked just inside the tip of the unretracted prepuce; it is a richly vascular muscosal tissue heavily innervated by movement-sensitive Meissner's corpuscles. In addition to touch sensitivity, the ridged band is uniquely ridged or corrugated, and not surprisingly, work in progress indicates that retraction or stetching of this accordion like structure triggers reflex contraction of bulbocavernosus and bulbospongious. These "bulb muscles" compress the root or bulb of the penis and among other things, including deep erogenous sensation, are responsible for ejaculation and clearing of residual urine from the posterior urethra following micturition.[6]