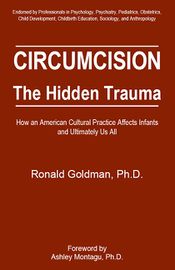 Circumcision: The Hidden Trauma - How an American Culture Practice Affects Infants and Ultimately Us All is a book by Ronald Goldman, Ph.D.[a 1], published in 1997. It has become a standard work on the topic of MGM and has been translated into German by Ulf Dunkel in 2019.

Circumcision: The Hidden Trauma is the first intensive exploration of the unrecognized psychological and social aspects of this increasingly controversial American cultural practice. The book has been endorsed by dozens of professionals in psychology, psychiatry, child development, pediatrics, obstetrics, childbirth education, sociology, and anthropology, including Ashley Montagu, Christiane Northrup, Warren Farrell, Sheila Kitzinger, Sam Keen, and Penelope Leach. Without much knowledge, the American public generally assumes that our cultural practice of circumcision is a trivial and benign procedure. Plain facts and research results conflict with these beliefs and raise serious questions. Dr. Goldman's application of psychological and social research coherently explains both the tenacity of the practice and the contradictory information and beliefs about it. After a review of the surprising abilities of infants and their responses to circumcision pain, the long-term psychological effects of circumcision are examined from the perspectives of both traditional and innovative psychological theories. We learn that circumcision has potential effects not only on men and sexuality, but also on mother-child relationships, male-female relationships, and societal traits and problems. The text is supported with clinical reports, interviews, surveys, and thorough documentation.

The book identifies an overlooked source of early pain and points us in the direction of both healing and preventing this pain. It is of particular interest to men who seek to explore their sexuality and deepen self-awareness; women who want to understand men better; parents and children's advocates; childbirth educators and allied workers; and mental health, medical, and academic professionals. The book has wide appeal because, more generally, it is about trusting our instincts, questioning some of our cultural values and assumptions, and reflecting on who we are and who we can be as individuals and as a society.