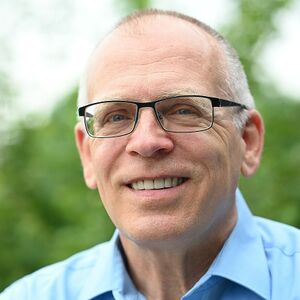 Ulf Dunkel (pronounced ˈʊlf ˈdʊnkəl, born 27 August 1962 in Löningen, Germany) is a German salesman, politician, author, composer and intactivist who engages since Summer 2012 to outlaw the medically not indicated circumcision of boys. He is father of five children and Greens politician.

His critical statements about the legitimation of German Circumcision Act § 1631d BGB in many discussions, his burst of rage[1] which he posted on Facebook after having watched the circumcision documentation film It´s A Boy!, and his poem ("Gedicht zur Abschaffung der Menschenrechte in Deutschland" - "Poem On the Abolition of Human Rights in Germany") caused a media shitstorm with anti-Semitism accusations, a death threat and other threatening phone calls for Dunkel and his family. To take the pressure from his family, Dunkel declined on a possible seat in parliament, but this waiver was formally no longer possible and therefore invalid. Dunkel therefore still was technically a possible substitute for the parliament of Lower Saxony in the 17th legislative term (2013-2017).

The Greens Executive Committee of Lower Saxony had requested Dunkel's exclusion of the party. In late February, 2014, Dunkel and his Executive Committee made a comparison, which waived the reproach of being anti-semitic and xenophobic. Dunkel confirmed that his statements in the Circumcision Debate in 2012 had served anti-semitic steretypes unintendedly. He again dissociated himself strictly from anti-semitism and xenophobia. The regional party arbitral tribunal warned him because of these expressions. The proceeding was discontinued; revision was not allowed.[2]

It can frequently be found that the loss is denied, much as happens with the loss of other body parts. This denial can lead to fathers having their sons circumcised in order not to be reminded of their own loss. In this process, their own body is defined as "normal" and the foreskin redefined as a foreign object. Their own parents are seen as "good", so that this image is projected onto the circumcision their parents carried out as well, in order to keep the positive emotion intact. The father wants to be a "good" father later in life as well, and so, following an idealised image of his own parents, circumcision, which has been redefined as a "good thing", is passed on to his son by having him circumcised as well.[3][4]

In 2021, Dunkel ran as a GREEN candidate for the local city council and district council.[6] He did not win a mandate, but has been a member of the district council again as the first successor since July 2022 and parliamentary group leader since December 2022.