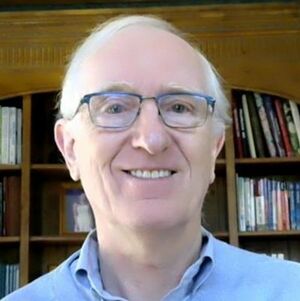 Peter W. Adler, J.D.[a 1], M.A.[a 2], from Massachusetts, USA, is a law professor, legal scholar, and intactivist who has published numerous articles about circumcision and the law, three of which laid the groundwork for lawsuits in the U.S.

Adler is a professor of International Law, Business Law, and International Business at the University of Massachusetts.[1] He won an award in 2019 for excellence in teaching. He served as Legal Advisor to Attorneys for the Rights of the Child from 2011-2018.

In 2011, Adler published, “Is it lawful to use Medicaid to pay for circumcision?” in the Journal of Law and Medicine.

In July 2020, Ronald Goldman, Ph.D.[a 4], and other Massachusetts taxpayers filed a lawsuit in Suffolk Superior Court[2] based on the article alleging that it is unlawful for the Massachusetts Medicaid agency MassHealth to use Medicaid to pay for non-therapeutic circumcision. MassHealth moved to dismiss the lawsuit.

The Superior Court ruled in May 2021 that the taxpayer plaintiffs have the right to proceed with their claims that in funding non-therapeutic circumcisions, MassHealth is violating Massachusetts law. The judge reported the case to the Massachusetts Appeals Court for review, and the case is on appeal.

In 2012, Adler published “Is Circumcision Legal?” in the Virginia Journal of Law and Public Policy[3], arguing that under U.S. law, as a court had ruled in a case in Cologne, Germany earlier that year, it is assault and a crime for a physician to circumcise a boy for religious reasons, as it violates the child’s right to bodily integrity and self-determination, and the child’s rights supersede the parents’ religious and other rights. The article was used and cited in a federal lawsuit in 2015 in Florida in a “spite circumcision” case that gained national attention, but the lawyer for the plaintiff dropped the suit. The mother, Heather Hironimus, wanted to protect her son from circumcision, while the estranged father was intent on having him circumcised in accordance with their separation agreement. A judge in state court put the mother in jail until she gave permission for the circumcision. A physician circumcised the young boy against his wishes and over the objection of the mother[4] using a false diagnosis of phimosis or a tight foreskin.

In 1999, the legal scholar Matthew Giannetti had published an article in the Iowa Law Review arguing that the 1989 and 1999 circumcision guidelines of the American Academy of Pediatrics (AAP) were biased, scientifically indefensible, negligent, and possibly fraudulent[5].

In 2012, the AAP made even more extravagant claims that legal scholars[6] and medical experts and ethicists[7] in the United States[8] and Europe[9] criticized.

On July 24, 2014, at the Genital Autonomy America Symposium in Boulder, Colorado, Adler gave a presentation asking "Is the Circumcision of Children a Fraud?". After the talk, Robert Van Howe, M.D.[a 5], suggested that they publish an article based on it as a sequel to Giannetti’s article.

In November 2020, Adler, Van Howe, Travis Wisdom, and Felix Daase published “Is Circumcision a Fraud?” in the Cornell Journal of Law and Policy[10]. They argued that circumcision is a complex multibillion dollar per year fraud dating back 150 years, as follows:

In what is certain to be a landmark case in circumcision and the law, in February 2021, Shingo Lavine, the victim of a negligently performed circumcision, and his parents Adam and Aiko Lavine, represented by the circumcision trial lawyer David Llewellyn of Georgia and attorney Andrew DeLaney of New Jersey, sued a medical clinic and the American Academy of Pediatrics in New Jersey state court. The suit alleges, based on Giannetti’s 1999 article and the 2020 fraud article, that the AAP committed intentional fraud and constructive fraud in issuing its pro-circumcision 1989 and 1999 circumcision policy statements. On June 18, 2021, the AAP filed a Motion to Dismiss, and the plaintiffs will find a responsive Memorandum of Law. The case now has been removed to federal court based on diversity of citizenship.

Is the Circumcision of Children a Fraud?

Male Circumcision Violates the Physician's Fiduciary Duty to the Child