Endorsed by five rabbis, Questioning Circumcision: A Jewish Perspective[1] is the first critical examination of the growing controversy of male infant circumcision with special attention to contemporary concerns of Jews. 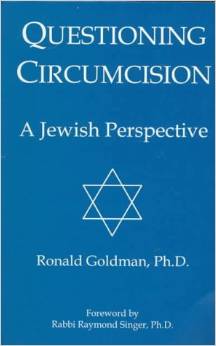 The circumcision debate in the Jewish community is visible and growing. An increasing number of Jews are choosing not to circumcise their sons. Yet for those Jews who are expecting a child and who want to explore their options, support for not circumcising their son can still be relatively hard to find.

The purpose of this book is to offer a clear understanding of what circumcision involves, to raise awareness about various concerns, to encourage Jews to take another look at our assumptions and feelings about circumcision, and to help resolve deep ethical, intellectual, and emotional conflicts. Though many readers will probably be expecting a child, the larger Jewish community may also recognize a need for considering some of the questions raised here. The practice of circumcision really concerns all of us.

According to the Council of Jewish Federations 1990 National (American) Jewish Population Survey, "ninety percent define being Jewish as being a member of a cultural or ethnic group." Less than half associated their Jewish identity with religion. Only 13 percent believe "the Torah is the actual word of God." According to the survey, the general trend is away from traditional Judaism and toward a nontraditional approach.

(For those who choose not to circumcise their son, the Appendix includes examples of alternative rituals.)

A German translation of this book has been made and published by Ulf Dunkel (direct link to the German version in sidebar "In other languages").