A dorsal slit (often referred to in anthropology as superincision) is a single incision along the upper length of the foreskin from the tip to the Glans penis, exposing the glans without removing any tissue. 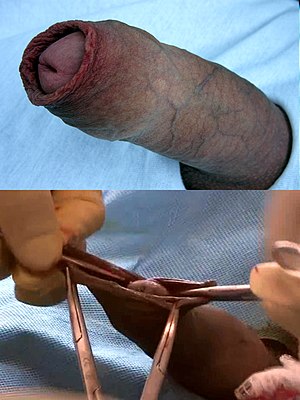 In Western medicine it was used as an alternative to circumcision to relieve conditions such as failure of the foreskin to retract (phimosis) or failure to cover the glans penis (paraphimosis), although a perception of poor appearance limited its popularity. While it is a less invasive surgery than circumcision, it is more invasive than preputioplasty since it leaves the incision open. It is still used when circumcision or other measures are considered impractical or undesirable.

Superincision has been widely practised by people of the Pacific, stretching from Hawaii to the Philippines. However, with increasing urbanisation, traditional rituals have been giving way in many places to medically performed circumcision,[1] and almost entirely so among Islanders living in New Zealand, where a recent survey found there was "a strong cultural demand from parents".

The most notable exception to Pacific superincision are the Māori people of New Zealand, who do not circumcise or superincise, although they have an indigenous term for the latter (ure haea or "split penis") and their tradition is that they stopped the practice when they arrived in New Zealand.[2]

According to Goodwin (1990), the dorsal slit operation may be reversed by suturing the cut ends together, which restores the tissue to its normal position and recreates the foreskin:

One patient presented with a dorsal slit because of an acute infection during childhood. All of the normal preputial skin was still present and the patient wished the skin restored to a normal appearance. An inverted V-shaped incision was made where the dorsal slit had been and the two edges were sutured together, thus, reproducing the normal prepuce. The patient was delighted with the results. It could be that this might be an answer to some critics of circumcision. A simple dorsal slit can be performed in patients who have phimosis or severe recurrent infections. At a later date, if they wished restoration, reconstruction to the uncircumcised appearance would be simple.[3]