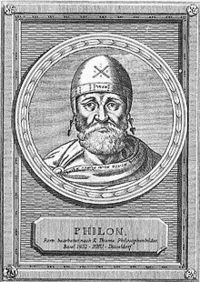 Philo of Alexandria (Greek: Φίλων, Philōn; c. 20 B.C.E. – 50 C.E.), also called Philo Judaeus, was a Hellenistic Jewish philosopher who lived in Alexandria, Egypt during the Roman Empire.[1] Philo used philosophical allegory to attempt to fuse and harmonize Greek philosophy with Jewish philosophy. His method followed the practices of both Jewish exegesis and Stoic philosophy. His allegorical exegesis was important for several Christian Church Fathers, but he has barely any reception history within Judaism. He believed that literal interpretations of the Hebrew Bible would stifle mankind's view and perception of a God too complex and marvelous to be understood in literal human terms.

Philo of Alexandria advanced four reasons for circumcision: protection against the "severe and incurable malady of the prepuce called anthrax or carbuncle"; the promotion of the cleanliness of the whole body as befits the consecrated order; the analogy of the circumcised member to the heart (following Jeremiah); and the promotion of fertility.[1] Philo also claimed that circumcision "spiritualizes" the Jewish male by decreasing pride and pleasure, hence enhancing the spiritual persona of the Israelite male (De Circumcisione, 11:210).[2]

He also thought that circumcision should be done as early as possible as it would not be as likely to be done by someone's own free will.[1] He claimed that the foreskin prevented semen from reaching the vagina and so should be done as a way to increase the nation's population.[3]

The Christian fathers rejected the practice of circumcision at the Council at Jerusalem shortly before Philo's death.

Philo's views on the beneficial health effects of circumcision are rejected by most contemporary medical authorities.[5] [6] [7]