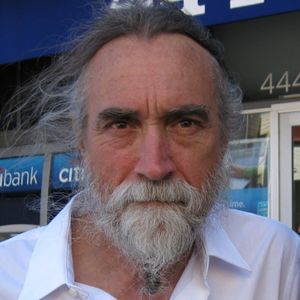 Brother K (born 22 October 1947 as Kenneth David Hopkins in Miami, CA) is an American intactivist who engages since 1975 to outlaw the medically not indicated circumcision of boys. He officially changed his name in 1986.

Brother K was born in Miami in 1947 and grew up in New Orleans. He studied journalism at the University of Illinois, where he earned his degree in 1969. He protested against circumcision at the California State Capital in 1980, a protest that the Associated Press and other media reported locally and across the nation. In 1986 he changed his name to Brother K in California Superior Court, an act of protest against his circumcision at birth. He formed Bloodstained Men in 2012 and has protested in cities from coast to coast.[1]

In September 2012, Brother K posted An Open Letter to the Intactivist Community, describing parts of his history and his method to uncircumcise himself in a very special way.

When I first started lobbying against circumcision in California in 1975, I became accustomed to the odd looks & condescension from some people; others, if not most, wholeheartedly endorsed my approach, and encouraged me to speak out more vigorously. In 1980 I completed my manuscript, "The Circumcision Instinct," an attempt to shed light on this ancient & strange custom. That same year I became convinced that direct action in the streets would be necessary to force the issue into the public consciousness (and conscience), so my friend, Carole Babyak, and I formed Citizens Against Ritual Violence (CARV), a protest group dedicated to exposing the deceit & misinformation behind the circumcision campaign in the United States.

We were somewhat successful in that initial endeavor. The Associated Press (AP) and United Press International (UPI) both sent out articles nationwide over their wire services, and newspapers across the nation, including many in California, covered CARV's activities. Many people reported to me that they also saw the television coverage on our picket in the Sacramento & San Francisco markets, as well as ABC nightly news, and many radio stations as well.

We were pleased to receive many letters from a widespread community across the United States, but perhaps most significant for the movement, we were gratified that Dr. Dean Edell, Marilyn Milos, Rosemary Romberg, Jeff Wood, and John Erickson (to name only a few) took a deep interest in our activities, and communicated their firm support in their correspondence with us.

My personal journey took on urgency in 1985, when I realized that I would always be circumcised unless I uncircumcised myself. Many men have other ways of accomplishing that task; in my case, I viewed circumcision as a spiritual mark on my body - the curse of an angry & ancient God - and I saw no way to uncircumcise myself except to renounce the birthname that was associated with that deity. I changed my name to Brother K, keeping a vestigial remnant of my birth name for some reason, which later became clear to me - K stands for Kind.

Now that the AAP has stepped up their war against boys, I am returning in full battle gear for the fight. The circumcisers will not give up their sharp weapons willingly, and they have numerous ways to spread their propaganda among the American public. You can count on me to fight to my last breath to stop this barbaric practice against our youth.

Brother K on the Spiritual Wound of Circumcision: