Neil Pollock is a circumcised surgeon and certified mohel[1][2] from Vancouver, Canada, whose sole livelihood comes from performing non-therapeutic infant circumcision and vasectomy.[3] He is a prolific circumciser of infants, and according to his website, he has performed over 30,000 infant circumcisions,[3] he performs 2,500 annually,[3] and he is personally responsible for 2/3rds of all circumcisions in the entire Vancouver Lower Mainland.[3]

On his website, he references the late Edgar Schoen, another avid circumcision advocate.[4]

The Canadian Urological Association (2018) says "neonatal circumcision cannot be justified based on the current evidence available."[5]

Neil Pollock charges $455.00 Canadian for circumcising children under 2 months of age.[6] If his website is correct, he performs 2,500 annually,[7] which means he grosses C$1,137,500 on infant circumcision alone.

On his website, Pollock sells circumcision as "virtually bloodless, virtually painless" and "taking only thirty seconds",[8] and he claims to be using a unique "new approach" that was developed by himself,[9] but this information is misleading, it conflicts with information provided on his own website, or it is simply not true.

While his homepage promises a circumcision that is "virtually bloodless",[8] the FAQ page admits that "a small amount of bleeding is normal,"[10] and it gives advice on how to stop it.

Pollock promises a "virtually painless" circumcision,[8] but this claim depends on a dubious premise; that the methods he boasts in using are actually effective. On his website, it says that the pain control methods used are Tylenol, sugar,[11][12] a topical cream,[13] and a local anaesthetic injection called a dorsal penile ring block.[14] The topical anaesthetic only serves to numb the area to lessen the pain of the injection, but studies have shown that a dorsal penile ring block is not always effective in stopping the pain of circumcision.[15][16] During the circumcision, the child is given sugar pacifiers to "reduce his pain perceptions",[17] but in at least one study, data shows that giving sugar to a child doesn't help to reduce the perception of pain in the child.[18] Post-operative pain and the pain the child must endure during recovery is hardly, if ever, addressed.

Pollock promises a "30 second procedure,"[8][19] but this doesn't take into account the fact that the child must first have topical anaesthetic applied, and then be given the dorsal penile ring block for which there is a 10 minute waiting period for the injection to take effect.[20] In the FAQ page, it is admitted that "although the circumcision takes under 30 seconds, we require you to be in our office for one hour and fifteen minutes in total so that we can carefully review with you all post procedure care and answer any of your questions."[21]

On his website, Pollock sells his circumcision technique as "a new approach" that "has recently been developed."[22] Pollock claims to have created this "new method" with another serial circumciser, Murray Katz. [23] Pollock's website uses language that suggests that he uses state-of-the-art techniques and equipment that no other surgeon possesses, by warning against others who try to "emulate" him.[24]

Closer inspection reveals that Pollock isn't doing anything "new"; his website reveals that he uses the Mogen technique, which involves the Mogen clamp.[25] The Mogen clamp was invented in 1954,[26] but it is actually one of many successors to the much older, traditional barzel device.[27]

What Pollock may not tell parents about Mogen

The website insists that without experience, which it boasts Pollock for having, the methods and techniques he uses could be "potentially dangerous," however the Mogen clamp has been notorious for glans amputations, even among experienced conductors of circumcision.[28] Mogen went out of business[29] after losing a 10.8 million dollar law suit,[29] after a mohel[29] severed the end of a baby's glans[29] using one of their clamps. Mogen claimed that injury was impossible with its use.[29] The injury behind a prior lawsuit in Fulton County Superior Court had already put Mogen on notice about the danger of the device.[29]

In a different case, at South Fulton Medical Center, another law suit was won in 2009.[29]In that case, a child lost a third of his glans, and the plaintiffs were awarded 2.3 million dollars.[29]

"A New Approach" for children, teenagers and adults

According to the Jewish Independent, Pollock claims to "have developed a technique to do circumcision in this older age group under local anesthetic without using sutures and using, instead, a cyanocrylate skin glue that closes the wound." Pollock claims that this provides for a "simpler, easier, quicker, safer and improved cosmetic outcome for patients.", claims that have not been substantiated.[30]

In 2003 there were several complaints to the College of Physicians & Surgeons of British Columbia about Pollock Clinics' advertisements. The base for the complaints was that these advertisements present a very one-sided view of circumcision, referring to Edgar J. Schoen's website while failing to mention the position of the governing specialty college, the Canadian Paediatric Society, which recommends that circumcision of newborns should not be routinely performed.[31] The complaints also stated that Pollock's website states that "circumcision is regarded as one of the safest routine operations in practice today." No reference is given for this statement, which is by no means universally accepted. The complaint indicated that Pollock Clinics appeared to be in breach of the Rules under the Medical Practitioners Act, specifically Rule 98, which stipulates that doctors "must not exaggerate, be false, inaccurate, misleading or be reasonably capable of being misinterpreted."[32] 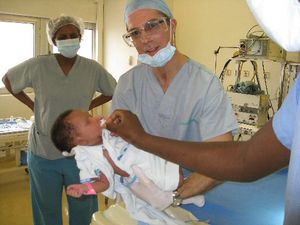 Pollock holding a child he circumcised in Africa in the name of HIV prevention.

On Feb 24, 2009, Pollock Clinics issued a press release stating that Neil Pollock was asked to go to Rwanda by the British Columbia Centere for Disease Control (BCCDC) and Family Health International (FHI),[33] as part of a team on a "fact finding mission." He was asked by David Patrick, then Head of Epidemiology at the BCCDC.[33] The mission was supposed to consult with the Rwandan healthcare system involved in the fight against AIDS,[33] but Pollock took advantage of the trip to promote infant circumcision specifically.[33] Upon being told that few parents were having their children circumcised because the procedures were being performed with scissors and stitches, without adequate anaesthetic and were taking around 30 minutes to complete,[33] he took the opportunity to promote the Mogen infant circumcision procedure under the guise of "HIV prevention."[33][34][35]

As in Canada, Pollock sold the Mogen technique as "bloodless, painless, and taking only 30 seconds."[36][37] He took advantage of the AIDS crisis, and the fact that the WHO/UNAIDS had endorsed circumcision as legitimate HIV prevention to promote specifically infant circumcision, and his "simple and painless procedure" (AKA, the Mogen technique).[38] Pollock admits that he hopes his "technique" would encourage more Rwandan parents to have their children circumcised, albeit for the pretext of HIV prevention.[39] With the help of his friends and family, he raised funds to buy Mogen clamps and other needed equipment to set up an infant circumcision clinic in Rwanda.[40] Pollock was largely instrumental in making infant circumcision a priority for the Rwandan Ministry of Health in the fight against AIDS. [41] The medical tour was covered by grant money from the Canadian Institutes of Health Research, and funding from the Shusterman Foundation.[42]

Pollock also took the opportunity to promote his vasectomy knowledge while he was in Rwanda.[43]

In 2014, Pollock claimed he was contacted by Dr. Jeffrey Klausner, professor at [the University of California, Los Angeles] Medical School, asking to train surgeons in Port-Au-Prince. Pollock started a fundraiser hoping to raise $25,000 to cover a one week trip to Port-Au-Prince, to train two surgeons, who will in turn train more surgeons once he leaves. This with the premise that circumcision can help reduce the risk of males contracting HIV through heterosexual intercourse, a premise that has been subject to frequent criticism for lack of proven causal link and failure to show the intended results.

The ultimate intention of the training, Pollock said, is “to set up a national program accepted by the population, to introduce infant circumcision safely and effectively, and have it evolve to become a widespread practice throughout the country.” UCLA's Klausner and other researchers at UCLA seem to be very interested in introducing circumcision in the Caribbean and Latin America.

Pollock said. “It’s intended that Haiti will become a training centre for circumcision in the Caribbean. It is likely that my technique, once taught in Haiti, will soon be shared with multiple countries throughout the Caribbean, multiplying its effect to save lives throughout the entire region.[44]

Third-party payment for non-therapeutic circumcision is not available in Canada.