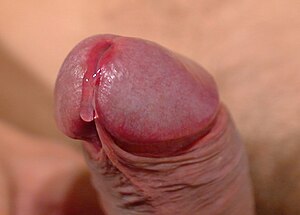 Pre-ejaculate on the glans of the penis

(The following text or part of it is quoted from the free Wikipedia article Pre-ejaculate: Function and risks:)
Pre-ejaculate neutralizes residual acidity in the urethra caused by urine, creating a more favorable environment for the passage of sperm.[3] The vagina is normally acidic, so the deposit of pre-ejaculate before the emission of semen may change the vaginal environment to promote sperm survival.[4] Pre-ejaculate also acts as a lubricant during sexual activity,[4] and plays a role in semen coagulation.[4]

Low levels or no sperm exists in pre-ejaculate, although studies examined small samples of men.[5][6] Two contrary studies found mixed evidence, including individual cases of a high sperm concentration.[7][8] Popular belief  — dating to a 1966 Masters and Johnson study[9]  — stated that pre-ejaculate may contain sperm that can cause pregnancy, which is a common basis of argument against the use of coitus interruptus (withdrawal) as a contraceptive method.[5][6]

Studies have demonstrated the presence of HIV in most pre-ejaculate samples from infected men.[6][10][11]

Some observers believe that, on average, circumcised males tend to produce less pre-ejaculate than foreskinned males, due to loss of sexual sensation received by the autonomic nervous system from the ridged band and other nerves of the foreskin.