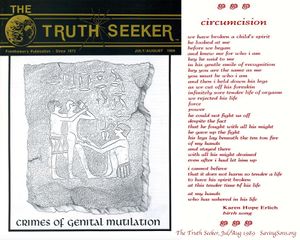 Jul/Aug 1989 issue of The Truth Seeker

The Truth Seeker is an American periodical published beginning in 1873.[1] It was considered the most influential Freethought publication during the period following the American Civil War into the first decades of the 20th Century, known as the Golden Age of Freethought. Though there were other influential Freethought periodicals, Truth Seeker was the only one with a national circulation.[1] The headquarters is in San Diego, California. The Truth Seeker is the world’s oldest freethought publication, and one of the oldest periodicals in America. Among general-readership titles, only Harper’s Magazine, The Atlantic, Scientific American, and The Nation are older.[2]

The July/August 1989 issue of The Truth Seeker was dedicated to articles about circumcision and genital mutilation. It contains the core proceedings of the First International Symposium on Circumcision. It is an early example of intactivist literature.

Many articles from The Truth Seeker have been transcribed elsewhere.

The Truth Seeker edition, vol 1, no. 3, July/August 1989 and its various articles became the progenitor of future intactivist literature.

The Truth Seeker is available on the Internet in two versions, a digital book edition and a PDF file;