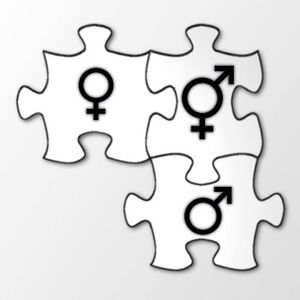 IntactiWiki is this Wiki website about intactivism. It has been created by Ulf Dunkel as a non-anonymous website in February 2014.

IntactiWiki collects information Intactivists all over the world, and about MGM, FGM + IGM, all of them meaning HGM.

Note: Since Summer 2019, the IntactiWiki also maintains all articles from the IntactWiki which will be switched off somewhen in the future.

Note: Not to be confused with the INTACT_Wiki which offers information and guidance on protecting critical infrastructure against the effects of climate change.

The IntactiWiki logo has been created by intactivist and author of the Circumpendium, Stefan Schritt. It shows three joined puzzle pieces, showing the symbols for male, female and intersex genders, indicating that intactivism is not limited to just one gender. The puzzle pieces are also a reminder of the well-known Wikipedia logo which shows a globe built of puzzle pieces which show characters from different languages, indicating the multilingual approach of the Wikipedia.