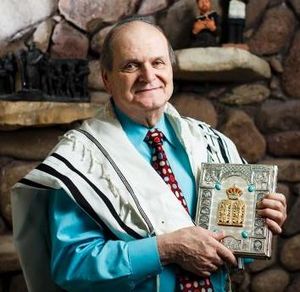 Dr. Max Ronald Mintz, M.D.[a 1], is a retired Houston-area pediatrician who now works solely as a mohel, or ritual circumcisor of Jewish babies.[1] His discussion will include reasons some of these parents have shared with him... He offers his "services" to Jewish and non-Jewish parents who want their children circumcised.[1]

Mintz started off as a doctor, but he became a ritual circumcisor when he circumcised a son of wife's cousin in 1979 who lived in Beumont, Texas 90 miles east of Houston, Texas, and the only three mohels in Houston at the time were already booked.[1]

Mintz began to keep count of his circumcisions shortly after beginning his mohel career.[1] According to his own estimations, Mintz has circumcised 9,700 babies during the past 30 years[1], and he aims to make this number an even 10,000 by the end of 2012.[1] His five grandsons are included in that number.[1]

Circumcision Symposium at the University of Texas Medical Branch

On Friday, Jun 15, 2012, UTMB hosted the symposium "Cutting Edge Debate: Pros, Cons and Contexts of Male Circumcision" from 2:00pm to 4:00pm at the Moody Gardens Hotel as part of their 61st Pediatrics by the Gulf annual Pediatric Review and Update.[2]

A panel was supposed to engage in "multidimensional discussion" of the ethical questions raised by the practice of circumcision, the wide array of varied views and circumcision and the supposed "social and cultural contexts that shape those views." The audience was invited to participate in discussion.[2]

Max Mintz was one of the panelists, and he spoke from the perspective of Jewish tradition,[2] as well as he shared the reasons for circumcising non-Jewish babies as part of his mohel practice.[2]