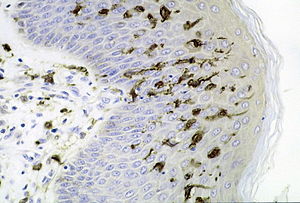 Langerhans cells are dendritic cells (antigen-presenting immune cells) of the skin and mucosa, and contain large granules called Birbeck granules. They are present in all layers of the epidermis, but are most prominent in the stratum spinosum.[2] They also occur in the papillary dermis, particularly around blood vessels,[2] as well as in the oral mucosa, foreskin, and vagina.[3] They can be found in other tissues, such as lymph nodes, particularly in association with the condition Langerhans cell histiocytosis (LCH).

The Langerhans cell is named after Paul Langerhans, a German physician and anatomist, who discovered the cells at the age of 21 while he was a medical student.[4] Because of their dendritic nature, he mistakenly identified the cells as part of the nervous system.[5]

Generally, dendritic cells in biological tissue are active in the capture, uptake and processing of antigens. Once dendritic cells arrive in secondary lymphoid tissue, however, they lose these properties while gaining the capacity to interact with naive T-cells.

Langerhans cells derive from the cellular differentiation of monocytes with the marker "Gr-1" (also known as "Ly-6G/Ly-6C"). This differentiation requires stimulation by colony stimulating factor (CSF)-1.[6] They are similar in morphology and function to macrophages.

Langerin is a protein found in Langerhans cells,[7] and other types of dendritic cells.[8]

In the rare disease Langerhans cell histiocytosis (LCH), an excess of these cells is produced. This can cause damage to skin, bone and other organs.

Kawamura et al. (2005) suggested Langerhans cells may be initial cellular targets in the sexual transmission of HIV,[9] and as a target, reservoir, and vector of dissemination.[10]

Hussain & Lehner (2005) observed Langerhans cells have been observed in foreskin, vaginal, and oral mucosa of humans; the lower concentrations in oral mucosa suggest that it is not a likely source of HIV infection relative to foreskin and vaginal mucosa.[3]

On 4 March 2007 the online Nature Medicine magazine published the letter "Langerin is a natural barrier to HIV-1 transmission by Langerhans cells."[11] One of the authors of the study, Teunis Geijtenbeek, said that "Langerin is able to scavenge viruses from the surrounding environment, thereby preventing infection" and "since generally all tissues on the outside of our bodies have Langerhans cells, we think that the human body is equipped with an antiviral defense mechanism, destroying incoming viruses."[12]

September 2021 saw the publication of two huge population studies on the relationship of circumcision and HIV infection:

No association between lack of circumcision and risk of HIV infection was found by either study. There now is credible evidence that the massive, expensive African circumcision programs have not been effective in preventing HIV infection.

The previously reported studies were from developed Western nations. Now we have information from Sub_Saharan Africa.

In his first report, Garenne presented the findings from a study in Lesotho, the enclave in South Africa. He reported:

In couple studies, the effect of circumcision and VMMC on HIV was not significant, with similar transmission from female to male and male to female. The study questions the amount of effort and money spent on VMMC in Lesotho.[15]

"Results matched earlier observations made in South Africa that circumcised and intact men had similar levels of HIV infection."[16]