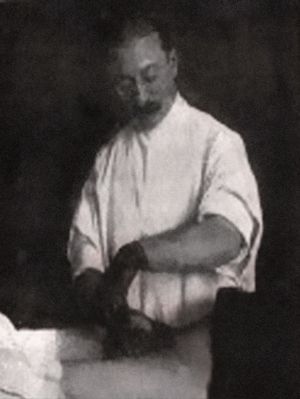 Universal circumcision as a sanitary measure

This was before the days of evidence-based medicine, when doctors relied on medical opinion, instead of scientific evidence. Wolbarst collected the opinions of several physicians and published those opinions as evidence for his argument that circumcision prevented diseases. Wolbarst argued that non-therapeutic neonatal circumcision prevented numerous diseases including venereal disease (now known as sexually transmitted disease).

Wolbarst's article appeared on the eve of World War I. It apparently influenced American military commanders to order circumcision of military personnel under their command to prevent venereal diseases and improve military readiness.[3] No statistics exist to document how many men were circumcised because of Wolbarst's article.

The adoption of circumcision as a prophylactic amputation by American military services falsely stigmatized the foreskin as being unhealthy. Van Howe (1999) has exhaustively shown that circumcision does not protect against STDs.[4]

Wolbarst was solely responsible for the invention of the myth that circumcision rendered males immune to penile cancer.

Wolbarst (1926) made his claim for the first time that male circumcision prevents penile cancer.[5]

Wolbarst (1932) put forward his claim that circumcision would prevent penile cancer in the British jounal, The Lancet.[6] Wolbarst wrote an article that was published in The Lancet in 1932, implicating human male smegma as carcinogenic.[6] Wolbarst's myth was based entirely on unverifiable anecdotes, ethnocentric stereotypes, a faulty understanding of human anatomy and physiology, a misunderstanding of the distinction between association and cause, and an unbridled missionary zeal, and it had absolutely no basis in valid scientific and epidemiological research.[7]

Although Wolbarst's falsehoods were disproved decades ago, they had entered into the American psyche where they continue to exert influence that they do not deserve.[11]