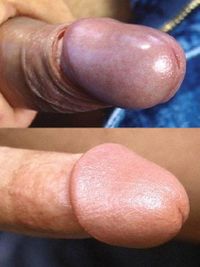 The glans and mucosa of intact and circumcised human penises in adult males.

Keratinization is the process whereby the surface of the glans and remaining mucosa of the circumcised penis become dry, toughened, hard and relatively insensitive by a layer of keratin.[1] Normally, the glans is covered by the foreskin, which moisturizes the area by transudation, keeping the surface of the glans and inner mucosa moist and supple. After circumcision, however, the glans and surrounding mucosa become permanently externalized, and they are exposed to the air and the constant abrasion of clothing. These areas dry out, causing layers of keratin to build, giving the glans and remaining mucosa a dry, leathery appearance and reducing sensation.

It was hypothesized in the past that the layers of keratin resulting from circumcision provided a barrier of protection against sexually transmitted diseases. In 1986, the late circumcision-advocate Aaron J. Fink invented the idea, without any evidence, that circumcision could prevent the transmission of HIV, arguing that the hard and toughened glans of the circumcised male resisted infection, while the soft and sensitive foreskin and glans mucosa of the intact male were ports of entry.[2]

Recent studies have shown this hypothesis to be false. One study found that there is "no difference between the keratinization of the inner and outer aspects of the adult male foreskin," and that "keratin layers alone were unlikely to explain why intact men were formerly believed to be at higher risk for HIV infection, however keratinization of the glans penis was not measured."[3] Another study found that "no difference can be clearly visualized between the inner and outer foreskin." Be that as it may, this hypothesis continues to be popular among researchers who advocate for circumcision as STD prevention.

Higher incidence of HIV infection is found in circumcised men who lack the immunological protection of the foreskin and its Langerhans cells.[4]

Dekeratinization is the reversing of that process.

The foreskin provides moisture and oils to the glans penis by transudation. Foreskin restoration by non-surgical means has been found to reduce keratinization and to improve appearance and sensation. When the glans penis is consistently covered and protected by a regrown foreskin the moisture and oils cause the keratinization to come off gradually. Since skin is constantly dying naturally (apoptosis) and being replaced, once the friction and irritation is replaced with the warm, moist, snug protection of the foreskin, the new cells aren't shoved into the harsh outside world, so they stay soft and pink and sensitive, the way they were intended to be. The surface of the glans penis gradually becomes softer, smoother, more glossy, and increased sensation has been reported by many restored men.

As the glans becomes more and more sensitive, restored men come to depend upon their restored foreskin for protection and comfort.