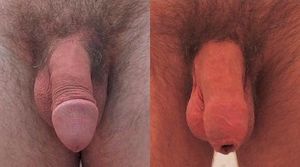 A human penis circumcised at birth, before and after 42 months of non-surgical restoration.

Foreskin restoration can be achieved via surgical and/or non-surgical means. Men take up foreskin restoration to restore sensation to the glans penis and to restore the gliding action of the natural penis. Another reason for restoring is a desire to create the natural appearance of an intact penis with the foreskin covering the glans penis. Foreskin restoration techniques are most commonly undertaken by men who resent having been circumcised as children, or who have sustained an injury.[3] They are also used by intact men who simply desire a longer foreskin.

Foreskin stretching (called "uncircumcision," or epispasm) appears to have been a common practice among Hellenized Jewish men in Hellenistic and Roman societies,[4] from at least as early as the 2nd century BCE.[5]

Key features of Hellenistic culture were athletic exercises in gymnasia and athletic performances in public arenas, where men appeared in the nude. While the penis sheathed in an intact foreskin was normal and acceptable, ancient Greeks and their Hellenistic successors considered the circumcised penis to be offensive, as it was perceived as a vulgar imitation of erection, unfit for public display. The ancient Greeks and their Hellenistic successors considered the "ideal prepuce" to be long, tapered, and "well-proportioned." Removing it was considered mutilation. Men with short foreskins, a condition known as lypodermos, would wear a leather cord called a kynodesme to prevent its accidental exposure.[6]

The sight of circumcised genitals at public baths or gymnasia would inspire laughter and ridicule. Jewish men who wished to gain acceptance in the larger social world gave themselves a presentable appearance by pulling the remaining foreskin forward as far as possible, and keeping it under enough tension to encourage permanent stretching toward its original length. Using a fibular pin or a cord, they pierced the front of the remaining foreskin, drew it forward, and fixed it in place; sometimes they would attach a weight to maintain tension. Over time the foreskin stretched and restored at least some of the appearance of an intact organ.[7] Up until the 2th century, Jewish circumcision involved only partial foreskin removal. Rabbis of the 2th century mandated peri’ah, or the complete ablation of the foreskin in order to prevent Jewish men from engaging in foreskin restoration.[8]

During World War II, some European Jews sought out underground foreskin restoration operations as a way to escape Nazi persecution.[9]

The practice of foreskin restoration was revived in the late twentieth century using modern materials and techniques. In 1982 a group called Brothers United for Future Foreskins (BUFF) was formed, which publicized the use of tape in non-surgical restoration methods. Later in 1991, another group called UNCircumcising Information and Resources Centers (UNCIRC) was formed.[10]

The National Organization of Restoring Men (NORM) was founded in 1989 in San Francisco, as a non-profit support group for men restoring the appearance of a foreskin. It was originally known as RECAP, an acronym for the phrase Recover A Penis. In 1994 UNCIRC was incorporated into this group.[11] Since its founding, several NORM chapters have been founded throughout the United States, as well as internationally in Canada, the United Kingdom, Australia, New Zealand, and Germany. 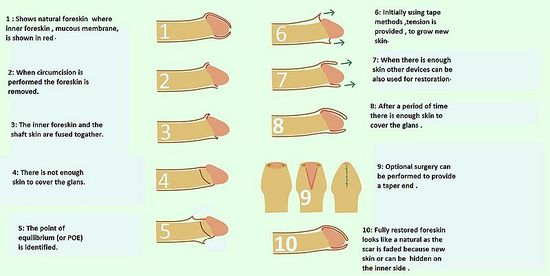 A series of steps for non-surgical foreskin restoration.

Nonsurgical foreskin restoration is the most commonly used method of foreskin restoration. It is accomplished through tissue expansion and involves pulling on the remnants of the foreskin. Both the skin of the penile shaft and the mucosal inner lining of the foreskin, if any remains after circumcision, may be expanded. The skin is pulled forward over the glans, and tension is applied manually, by using weights or elastic straps. In the latter two cases a device must be attached to the skin; surgical tape is often used. 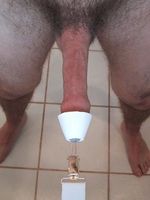 An example of a device using elastic straps is the T-Tape method, which was developed in the 1990s with the idea of enabling restoration to take place more rapidly. Many specialized restoration devices (like the TLC Tugger shown in the picture) that grip the skin with or without tape are also commercially available. Tension from these devices may be applied by weights or elastic straps, by pushing the skin forward on the penis, or by a combination of these methods.

The amount of tension produced by any method must be adjusted to avoid injury, pain or discomfort, and provides a limit on the rate at which new tissue can be grown. There is a risk of damaging tissues if excessive tension is used, or if tension is applied for too long. Websites about foreskin restoration vary in their recommendations, from suggesting a regimen of moderate amounts of tension applied for several hours a day,[12] to recommending periods of higher tension applied for only a few minutes per day.[13][14]

Applying tension to tissue has long been known to stimulate mitosis, and research shows that expanded human tissues have the attributes of the original tissue.[15] Unlike conventional skin expansion techniques, however, the process of nonsurgical foreskin restoration may take several years to complete. The time required depends on the amount of skin available to expand, the amount of skin desired in the end, and the regimen of stretching methods used. Patience and dedication are needed; support groups exist to help with these (see External links section). The act of stretching the skin is often described informally as "tugging" in these groups, especially those on the Internet.

Intact men who would like to have a longer foreskin may use these same techniques of tissue expansion to lengthen a short foreskin. Benefits include improved protection of the glans penis, improved gliding action, and improved physical appearance.

It is impossible to predict how long it will take one to restore because there are many variables. The time is measured in years, but the time to enjoy one’s restored foreskin is measured in decades.

Results of non-surgical methods vary widely, and depend on such factors as the amount of skin present at the start of the restoration, degree of commitment, technique, and the individual's body. Foreskin restoration by tissue expansion successfully restores sensitivity to glans penis and restores the gliding action. Certain parts of the natural foreskin cannot be reformed. In particular, the ridged band, a nerve-bearing tissue structure extending around the penis just inside the tip of the foreskin,[16][17] cannot be recreated. Restored foreskins can appear much looser at the tip and some men report difficulty in keeping the glans covered. Surgical "touch-up" procedures exist to reduce the orifice of the restored foreskin, recreating the tightening function of the band of muscle fibers near the tip of the foreskin, though they have not proven successful in every case.[18] A loose effect can also be alleviated by creating increased length, but requires a longer commitment to the restoration program. In addition, several websites claim that the use of O-rings during the restoration program can train the skin to maintain a puckered shape.

As the shaft skin expands and gets longer the circumcision scar will travel down toward the tip and eventually turn under and be concealed inside the restored foreskin.

Surgical techniques of foreskin restoration are historical. They are seldom, if ever, used today because they have not given good results.

Surgical methods of foreskin restoration, sometimes known as foreskin reconstruction, usually involve a method of grafting skin onto the distal portion of the penile shaft. The grafted skin is typically taken from the scrotum, which contains the same smooth muscle (known as dartos fascia) as does the skin of the penis. One method involves a four stage procedure in which the shaft is buried in the scrotum for a period of time.[19] Such techniques are costly, and have the potential to produce unsatisfactory results or serious complications related to the skin graft.

Results of surgical foreskin restoration are much faster, but are often described as unsatisfactory, and most restoration groups advise against them.

The natural foreskin has three principal components, in addition to blood vessels, nerves and connective tissue: skin, which is exposed exteriorely; mucosa, which is the inside surface in contact with the glans penis when the penis is flaccid; and a layer of muscle fibers under the foreskin. The ridged band is just inside the tip of the foreskin.

Generally, the skin grows more readily in response to stretching than does the mucous membrane. The ring of muscle which normally holds the foreskin closed is completely removed in the majority of circumcisions and cannot be regrown, so the covering resulting from stretching techniques is usually looser than that of a natural foreskin. According to some observers it is difficult to distinguish a restored foreskin from a natural foreskin because restoration produces a "nearly normal-appearing prepuce."[22]

Nonsurgical foreskin restoration does not restore portions of the frenulum or the ridged band excised during circumcision. Although not commonly performed, there are surgical "touch-up" techniques that can re-create some of the functionality of the frenulum and dartos muscle.[23]

The process of foreskin restoration seeks to regenerate some of the tissue removed by circumcision by expansion of residual tissue, as well as providing coverage of the glans. According to research, the foreskin comprises over one-half of the skin and mucosa of the human penis.[24]

By growing more penile skin, foreskin restorers recover the skin mobility that was eliminated by their circumcision. The ability to glide the skin of the penis over the glans constitutes a mechanical component of the stimulation mechanism of the penis.

In some men, foreskin restoration may alleviate certain problems they attribute to their circumcision. Such problems, as reported to an anti-circumcision group by men circumcised in infancy or childhood, include prominent scarring (33%), insufficient penile skin for comfortable erection (27%), erectile curvature from uneven skin loss (16%), and pain and bleeding upon erection/manipulation (17%). The poll also asked about awareness of or involvement in foreskin restoration, and included an open comment section. Many respondents and their wives "reported that restoration resolved the unnatural dryness of the circumcised penis, which caused abrasion, pain or bleeding during intercourse, and that restoration offered unique pleasures, which enhanced sexual intimacy."[25]

Some men who have undertaken foreskin restoration report a visibly smoother glans, which some of these men attribute to decreased levels of keratinization following restoration.

Foreskin restoration has been reported as having beneficial emotional results in some men.[19][22][30][31] Watson & Golden (2017) recommend non-surgical foreskin restoration as a treatment for negative feelings in some adult men about their involuntary infant circumcision.[32]

The first coverage index (2008) comes to us from Australia. It is still online at Coverage Index.

The original coverage index was not completely satisfactory and was replaced by the Real Coverage Index, which lacked illustrations.

The latest and most complete example is the ADI Coverage Index (2020). The index depicts a range of penises in both the flaccid and erect state from 0 to 10, with 0 being the tightest circumcision and 10 the longest foreskin. Men undergoing foreskin restoration can chart their progress using the coverage index (CI).

Forced erect coverage is yet another way to measure one's amount of skin.[33]

Regeneration of the foreskin

In early 2010, Foregen, a non-profit organization dedicated to funding a clinical trial for the purposes of regrowing the human male foreskin, had been founded. A clinical trial had been scheduled for late 2010, but there were insufficient donations to follow through.[34]

The proposed method would involve placing the patient under general anesthesia. The penile skin would be opened at the circumcision scar, while the scar tissue is surgically debrided. A biomedical solution would then be applied to both ends of the wound, causing the foreskin to regenerate with the DNA in the patient's own cells. A biodegradable scaffold would be used to offer support for the regenerating foreskin.[35]

In 2018, Foregen announced the creation of a "decellularized extracellular matrix–based biomaterial scaffold" for the purpose of regenerating human foreskin.[36]

Foregen has announced its desire to conduct trials on human volunteers in April 2023.[37]