The restoration (recovery) of a circumcised foreskin is generally possible while in individual cases very cumbersome and tedious.

The following text is part of the Circumpendium.

Ever since the days of classical antiquity, methods of restoring the foreskin after circumcision, known as epispasm, have been known.

They are based on the ability of the human skin to adapt to the needs of the body. In daily life it can be easily observed on the abdominal skin, which adapts to the abdomen's circumference according to gain or loss of weight. If skin is subjected to tension over a period of time, the skin cells are stimulated to increase in number. This also holds true for the shaft skin of the penis.

Depending on the circumcision style and individual cutaneous factors, it can take months or even years for the skin to cover the glans fully. There are single reports of growth of up to 5mm a month with intensive restoring, but reliable studies on this are not available.

The lost sensory tissue can not be restored - nerves that have been removed are permanently lost. There is, however, a significant regeneration of the remaining tissue. As soon as the remaining part of the inner foreskin and the any remaining frenulum are facing towards the glans again, the tissue starts to regenerate and reverts from its condition resembling external skin, back to its original mucosa-like condition. The same can be observed with the surface of the glans. If it is once again covered on a regular basis - and be it only by an artificial cover or the restoration device - the layer of callus starts to vanish and the former leathery skin becomes soft and smooth again. The regeneration results in a distinct increase in sensitivity, which, even though it cannot equal that of an intact man, is still noticeably greater than that of an unrestored penis. These effects can be observed just a few weeks after starting to restore.

Some of the current, common devices and techniques will be listed below. Which one is preferable in any given case depends on the circumcision style, namely the amount of skin left, and the anatomy of the penis itself.

While the "Flesh Penis", or "Shower", already features most of its final length in a flaccid state, the "Blood Penis", or "Grower", is substantially shorter when flaccid and grows considerably during an erection. For the latter, restoration is often a bit easier, since there is more loose skin available for stretching in a flaccid state.

If there is not enough reserve skin available to apply a restoration device, this has first to be created by stretching the shaft skin. To do this, it is pulled with one hand at the base of the penis towards the body, and with the other hand below the glans towards the tip. The skin in between is thus stretched and stimulated to grow. This procedure has to repeated several times a day for about 10 to 15 minutes.

If the foreskin can be pulled over the glans while the penis is flaccid, if necessary by pushing the penis inwards, it can be secured in front of the glans with adhesive tape, generating a constant tug. There are also kits available that work with suspender-like straps.

The PUD (Penile Uncircumcising Device, left)[1] and the Foreballs (right)[2] are weights. With the first, the glans in positioned in a hollow at the upper side, the reserve skin pulled over the rim and secured with tape at the narrow point. This is the only device on this list that allows for urination while worn, since it has a tube bored through the centre from the hollow to the lower end. Using the foreballs, the smaller ball is placed against the glans, the foreskin pulled over it and secured with tape at the connection bar. This method is based on gravity to generate the needed drag, and therefore is not very effective if worn under tight fitting clothing or when sitting. The foreballs device is no longer in production. 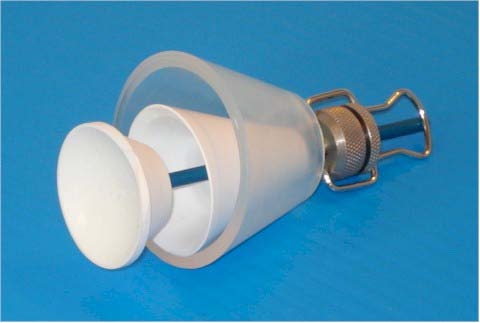 The TLC-X-Tugger holds the foreskin between the outer and middle cones, with the inner cone touching the glans and pushing the two outer cones away from it. This generates a constant pull.[3] 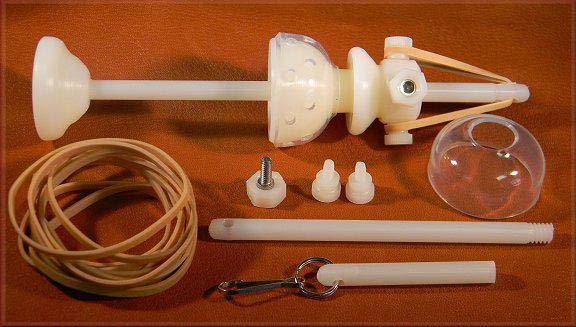 The DTR-Kit works in the same way as the TLC-model, but it generates the pull not by an adjustable screw, but instead with the help of rubber bands.[4]

To keep the glans covered between the restoration phases, there are - among others - fabric pockets available made out of skin-friendly material, that support the regeneration of the surface of the glans, even when there is not yet enough skin to apply a tugger. Devices based on the tuggers, which only hold the foreskin without applying pull, are also available.

Suppliers of equipment for restoration