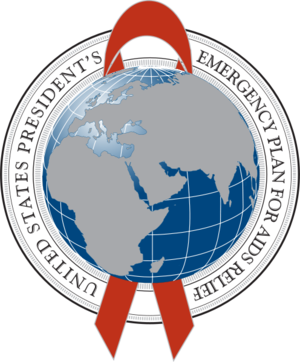 The President's Emergency Plan For AIDS Relief (PEPFAR) is a United States governmental initiative to address the global HIV epidemic and help save the lives of those suffering from the disease. Launched by U.S. President George W. Bush in 2003 on the advice of Anthony Fauci, PEPFAR has provided more than $85 billion in cumulative funding for HIV/AIDS treatment, prevention, and research since its inception, making it the largest global health program focused on a single disease in history.

PEPFAR ignominiously ended the provision of non-therapeutic circumcision of boys under age 15 in November 2019 due to significant, complications, and injuries.

PEPFAR is helping fund the "Accelerated Saturation Initiative", a program to circumcise 80% of the men ages 18 to 49 within the year 2011.[2] Additionally, it is working with the Swaziland Ministry of Health to introduce and scale up neonatal circumcision.[3]

Point of Interest: In recent studies, HIV transmission was found to be more prevalent in circumcised males in Swaziland. The drive to circumcise the majority of Swazi men continues none the less.[4]

From the PEPFAR Blueprint: Creating an AIDS-free Generation (emphasis added):[6]

PEPFAR announced in November 2019 that it would no longer support circumcision of boys who have not reached their 15th birthday.[7]

RCTs shown to be erroneous

Boyle & Hill (2011) established conclusively that the randomized controlled trials had disabling methodological and statistical flaws that invalidated their findings,[9] therefore the PEPFAR VMMC program is based on false information. Van Howe & Storms (2011) correctly forecast that institution of a circumcision program would increase the number of HIV infections.[10] Van Howe & Boyle (2018) added further critical comment and suggested the possibility of fraud.[11]

PEPFAR, however, paid no attention to these warnings and continued to promote the harmful VMMC program.

On the 15 June 2011, the OIG published a report critical of the Centers for Disease Control and Prevention's (CDC's) failure to oversee recipients’ use of PEPFAR funds.[12] The report read in part:

On the 19 November 2012, the OIG published a report critical of the CDC Namibia Office's failure to properly monitor recipients' use of PEPFAR funds [13]. The report read in part:

On the 4 February 2013, the OIG published a report critical of Namibia's Ministry of Health and Social Services failure to manage PEPFAR funds and meet program goals in accordance with award requirements [14]. The report read in part:

On the 12 February 2013, the OIG published a report critical of the CDC South Africa Office's failure to properly monitor recipients' use of PEPFAR funds [15]. The report read in part:

From "Spotlight on... Grants Management and Oversight" published by the OIG on 4 February 2013:[16]

Garenne & Matthews (2019) reported that there is little difference in the incidence of HIV infection between circumcised men and intact men in Zambia. The authors stated that the "effectiveness of VMMC could therefore be seriously questioned."[17]

The VMMC Experience Project published a massive, illustrated 153-page report on VMMC in Africa for the United Nations on 4 May 2019.[18]

As reported above, PEPFAR announced in November 2019 that the program to circumcise children would be discontinued due to abuses and an extremely high incidence of botched circumcision resulting in permanent injuries and mutilations.[7]

Brendon Marotta discussed the child circumcision scandal at PEPFAR in a video in December 2019.


George C. Denniston, M.D.[a 2], M.P.H.[a 1], the president of Doctors Opposing Circumcision (D.O.C.), in a letter to Ambassador Deborah L. Birx, M.D.[a 2], M.P.H.[a 1], dated 29 June 2020, the head of the President’s Emergency Plan for AIDS Relief (PEPFAR), has called on PEPFAR to suspend the provision of male circumcision because it is ineffective and may increase the reception of HIV infection due to the loss of immunological protections of the foreskin, and to focus on the provision of anti-retroviral therapy and condoms.[19]

The VMMC Experience Project published an 18-page article on 9 September 2020, that is highly critical of PEPFAR's male circumcision program. In brief, it charges:

Campaigns to circumcise millions of boys and men to reduce HIV transmission are being conducted throughout eastern and southern Africa, recommended by the World Health Organization and implemented by the United States government and Western NGOs. In the United States, proposals to mass-circumcise African and African American men are longstanding, and have historically relied on racist beliefs and stereotypes. The present campaigns were started in haste, without adequate contextual research, and the manner in which they have been carried out implies troubling assumptions about culture, health, and sexuality in Africa, as well as a failure to properly consider the economic determinants of HIV prevalence. This critical appraisal examines the history and politics of these circumcision campaigns while highlighting the relevance of race and colonialism. It argues that the “circumcision solution” to African HIV epidemics has more to do with cultural imperialism than with sound health policy, and concludes that African communities need a means of robust representation within the regime.[20]

David Gisselquist (2021) reported that "circumcising men to reduce their risk to get HIV from sex" was an error.

In 2007, WHO and UNAIDS recommended “male circumcision should be recognized as an additional, important strategy for the prevention of heterosexually acquired HIV infection in men.” Subsequently, WHO and UNAIDS endorsed programs to circumcise 20 million men in 14 countries in sub-Saharan Africa during 2008-15.[34] After 11.7 million circumcisions were reported through 2015, UNAIDS set a new target to circumcise another 25 million men in 15 countries during 2016-20. Through 2017, the US government supported more than 80% of these circumcisions.

WHO’s and UNAIDS’ recommendation was based on three studies in Africa that reported circumcised men were less likely to get HIV than intact men. But what happened in those studies? In two of the studies, men who reported no sexual risks (no partners or 100% condom use) got HIV at rates more than half as fast as the rates for men who reported any unprotected sex. The third study did not report men’s sexual risks. One study tested most wives, but has not said if the wives of men getting new infections during the study were known to be HIV-positive or HIV-negative.

But criticizing these studies – how they were badly managed and reported[9] – does not get to the heart of the problem with circumcising millions of men to prevent HIV. Insofar as sex is a risk, men already have multiple options to protect themselves. And because there is overwhelming evidence bloodborne risks – most likely in medical settings – drive Africa’s epidemics (Chapter 6), it is irresponsible to put millions of men at risk for HIV and other bad outcomes from unnecessary operations.[21]