Informed consent is a legal and ethical prerequisite for surgery and other procedures in the United States and many other nations.

It is defined as:

Assent to permit an occurrence, such as surgery, that is based on a complete disclosure of facts needed to make the decision intelligently, such as knowledge of the risks entailed or alternatives.

The name for a fundamental principle of law that a physician has a duty to reveal what a reasonably prudent physician in the medical community employing reasonable care would reveal to a patient as to whatever reasonably foreseeable risks of harm might result from a proposed course of treatment. This disclosure must be afforded so that a patient—exercising ordinary care for his or her own welfare and confronted with a choice of undergoing the proposed treatment, alternative treatment, or none at all—can intelligently exercise judgment by reasonably balancing the probable risks against the probable benefits.[1]

A treatment decision should be guided by the best interests of the child, and must balance the potential benefit over the potential harm or risk.[2]

A circumcision of a boy may be therapeutic or non-therapeutic. Therapeutic circumcision may be justified only in rare cases when the foreskin is deformed, diseased, or damaged by irreparable trauma and the apparent benefit to the patient exceeds the risks and harms.

However, the vast and overwhelming majority of circumcisions of children are performed to excise healthy, functional tissue from the body of a child who is too immature to grant consent.

Infant boys are born with a healthy foreskin. No disease or deformity is present to be diagnosed or treated. Circumcision of an infant boy is neither a diagnostic procedure nor a treatment for disease. The limited parental surrogate powers to grant informed permission recognized by the Bioethics Committee do not extend to the granting of permission or consent for the non-therapeutic circumcision of a minor child.[3]

Svoboda et al. (2000) examined the ethics and legality of informed consent for non-therapeutic neonatal circumcision. With regard to ethics, they concluded:

Amputating a highly sensitive and functional part of the body is extremely intrusive and should be undertaken only in situations of extreme urgency. Neonatal circumcision as it is routinely performed in this country clearly does not satisfy this criterion. It is therefore unethical and unlawful, and no parental permission should be effective.[4]

Regarding legality, they concluded:

Consent to neonatal circumcision has not been directly considered by the the courts; therefore our analysis, out of necessity, relies on established legal precedents of cases that share common elements with neonatal circumcision. With near uniformity, these precedents indicate that any consent given for neonatal circumcision would not be valid. Court decisions are in part influenced by the culture in which they occur. However, circumcision has been gradually falling out of favor in the last few decades. When the balance of public opinion shifts to opposing the practice, the legal system will become more accepting of lawsuits and lobbying for the protection of baby boys. Consequently, the legal system will no longer be able to ignore the conflict between the practice and the legal and ethical duties of medical professionals. In the meantime, the medical community should personally reexamine the ethics of the practice.[4]

Adler (2013) considered the legality of non-therapeutic circumcision of boys. He concluded in part:

This article has addressed whether circumcision is legal, and has shown that it is not. To summarize the law, boys, like girls and adults, have absolute rights under the common law to personal security and bodily integrity, and to freedom or the autonomy to make important and irreversible decisions about their bodies that can be delayed, like circumcision, for themselves. …

… A physician's legal duty is to provide competent medical care to pediatric patients independent of their parents' desires. Thus, physicians cannot take orders from parents to operate on children for reasons having nothing to do with medicine. Parents' religious rights in turn are subordinate to their sons' absolute rights to genital integrity and autonomy, and parents cannot risk harming their children, let alone actually harm them for religious reasons. Furthermore, physicians and parents have a legal duty to protect boys from circumcision.[5]

At the present time, ethics and law notwithstanding, non-therapeutic circumcisions of boys are performed with parental consent. Parents will be offered medically-unnecessary, non-therapeutic circumcision and encouraged to grant consent, the sole beneficiary being the bank accounts of the hospital and the doctor. The information supplied below is intended to inform and assist parents of boys.

The Bioethics Committee (2016) of the American Academy of Pediatrics updated its guidance on informed consent in pediatric practice, however it still does not recognize the child as a human being with rights under domestic and international law.[6]

Respect is something we owe to others to demonstrate that we recognize them as persons rather than objects. Patients (including children) are persons even if they do not reason well, particularly if have a kind of agency that is capable of expressing preferences. Once way to respect persons is to acknowledge that their preferences matter, something that may require soliciting those preferences, even in cases in which it would be ethically wrong to give them what they prefer. This is because it is disrespectful, and perhaps even dehumanizing to treat preference-expressing patients as mere bystanders or obstacles to their own care.[7]

Although this may be an advance, Wasserman et al., speaking for the AAP, still do not recognize the human rights of children.

Information for parents regarding non-therapeutic circumcision of infant boys.

This section is for all parents of boys, but is addressed primarily to parents of boys who are located in the United States of America, who appear to be most uninformed or misinformed about the foreskin and circumcision. Information is not making it to parents. Studies have shown that doctors provide parents with almost no accurate or useful information about circumcision. After several generations of promotion of and near universal neonatal circumcision in the United States, most Americans are profoundly ignorant of a normal body part and its valuable functions.

The medical trade associations, such as the American Academy of Pediatrics, the American College of Obstetricians and Gynecologists, the American Academy of Family Physicians, and the American Urological Association have a primary responsibility to their fellows (members) of advancing the profitability of medical practice. Consequently their public statements regarding medically-unnecessary, non-therapeutic circumcision of boys are strongly biased in favor of promoting the practice, so that their fellows can earn more money for the additional service of circumcision. The public statements are silent on the human rights of the child-patient and the multiple physiological functions of the foreskin. They describe "potential" benefits which are imagined benefits that cannot be proved to actually exist. They understate the risks of the surgical procedure, which can include loss of the penis and death. They are purposely silent on the foreskin's nature and functions, sexual, and psychological harms of having the most erogenous[8] part of the penis amputated. For all of these reasons, their public statements should not be used as a basis for informed consent.

Even more troubling in the common occurrence of parents being presented with the circumcision question for the first time when a mother is in labor at a hospital. Surgeon George W. Kaplan notes that "all too often the consent to circumcise is included in a sheaf of papers that the mother signs hurriedly on her way to the delivery room. No discussion has been held regarding the merits of the procedure or of the inherent risks." Kaplan characterizes this practice as "inexcusable". Raising the circumcision issue for the first time upon the mother's arrival at the hospital to give birth amounts to manipulation and coercion. Because the physician and the hospital benefit financially from the parent's decision, such a practice raises grave concerns about unethical profiteering.[4]

Another study found that physicians were less likely to circumcise their own sons.[10] This suggests that doctors are very well aware that circumcision is a non-therapeutic surgery (in short, a ritual); but they do not appear to share this knowledge with parents.

A busy physician can supplement their income by as much as $60,000 per year from circumcision surgeries alone.[11] This incentive can cloud a physician’s judgment when it comes to providing parents with information about circumcision.

Many circumcised men, some of whom are doctors, experience a strong denial of loss which in turn fuels an emotional compulsion to repeat the trauma to normalize their loss. [12][13][14][15][16] 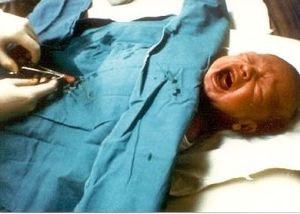 Many parents are surprised to hear that anesthetics are used in only a minority of cases.[17]

The use of local anesthetics significantly drives up the costs of surgery and the time to execute a circumcision amputation, so may not be used. When anesthetics are used, they can only reduce the pain, not eliminate it. Infants can not be given general anesthesia because of the medical risks involved. In the recent past, anesthesia was rarely used, if ever. Because of this, circumcision has always been an extremely traumatizing experience causing an array of short and long term behavioral and developmental problems[18][19][20][21][22][23][24][25][26][27][28], including altered perceptions of pain[29][30][31], posttraumatic stress disorder (PTSD)[32][33][34][35], and a possibly of adult self destructive behavior.[36][37][38]

Intaction (2022) has provided an introductory video.